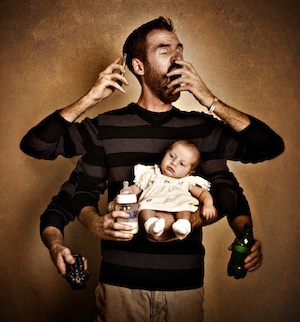 My father-in-law is a good sort: generous, good-humoured, sincere. But frankly, when it comes to women’s issues, he is all kinds of fucking dinosaur.

“Paternity leave! Bloody ridiculous!” he exclaimed the other day, while reading the paper.

Now normally, for the sake of family cohesion, I let things like this go:

Me: Sheesh! You’re sooo crazee, but whatever!

Father-in-law: Brawn is bloody delicious! Not like that foreign muck.

Me:  Mmm. It does sound tasty. (A terrine of meat jelly made of a pig’s head and pig’s tongue also known as ‘head cheese’ … what’s NOT to like?)

But the notion that paternity leave is bloody ridiculous got right on my mildreds. As far as yours truly is concerned, the new legislation on shared parental leave, which will apply to babies born on or after April 5th 2015, may well be the single most important piece of legislation in the struggle to achieve workplace equality in a decade, with employers who currently look upon women of childbearing age as liabilities having to consider that men, too, may require extended leave. And shared parental leave not only promises to change attitudes in the workplace, but to a more equitable division of labour at home too, with fathers doing the type of things that, just a few seconds ago, would have been unthinkable. (Such as TAKING THE FUCKING SUITCASE DUMPED IN THE HALLWAY UPSTAIRS, INSTEAD OF USING IT AS A WARDROBE, BY WHICH I MEAN FLOOR.) Yes, the policy needs some serious tinkering  – more on this later – but the principle of extending paternity leave to allow fathers to share up to a year’s parental leave is a no-brainer. End of.

“So why is it bloody ridiculous?” I ask my father-in-law.

“Why should Joe Public pay for men to stay home for two weeks doing nothing?” he says.

“So how did people like my mother manage?” he says.

“Because they probably had five great-aunts, eleven aunts, five sisters, grandmothers, a mother, and assorted members of the extended family, all living next door,” I say, contemplating the horror of having relatives around for 30 days, crinkling their noses at the whiff wafting from your vagina and demanding tea.

I don’t mention the idea that just because something might be “manageable” doesn’t make it ok. People managed to survive for years without entitlement to sick pay, holiday pay, a minimum wage, employment rights of any kind, or the vote, and even my father-in-law would agree that we don’t want to go back there.

“Besides, why would you deny men the chance to spend time with their babies?” I say, hopefully.

“They see them in the nights and weekends. No need to bankrupt the bloody country over it. “

I turn to my partner for support. Being a boy, I’m guessing he’s loads better than me at sums *sarcastic face*.  I’m hoping he might explain that paid paternity leave – even if it were extended to four weeks at full pay as recommended by the IPPR – would only cost the UK taxpayer in the region of 150 million. I say “only”, because compared with the £95 billion a year that rich corporations and individuals cost the state when they shun taxes, or the £100 billion it costs the taxpayer to pay for insurance for the banks, this is a small price to pay for a more equal society.

“I think paternity leave is a good thing,” says my partner, but without the unbridled enthusiasm I was looking for. And with that he walks out of the room, presumably because he suspects that I am THIS close to talking about my vagina.

As it turns out, my father-in-law is not alone in his aversion to even basic forms of paternity leave.  Research by the Institute of Leadership and Management (ILM) shows that a quarter of new fathers take NO paternity leave. According to the ILM, one issue behind the dismal take-up is the attitude of employers. “There remains a cultural expectation within organisations that women will be the ones taking extended periods away from the workplace,” says Charles Elvin, ILM Chief Executive.  His thoughts are echoed by Cityfathers, a support group for working fathers in the City, which found that a quarter of men feared it would be ‘career death’ to ask for time off to look after their children. To which the only reasonable response is: (WO)MAN THE FUCK UP.  IT’S YOUR BABY TOO. THIS IS LITERALLY THE FAULT OF YOUR EJACULATE.

But attitudes aren’t the only issue. Paying men less than the minimum wage to stay at home (statutory maternity or paternity leave currently stands at a very grim £138.18 per week), in a society where men earn an average of £5000 a year more than women, just won’t work. Even in Sweden, famous for its enlightened attitudes (where eight in ten fathers now take a third of the thirteen months of available leave), the gender pay gap meant that men didn’t take up their entitlement to shared parental UNTIL there were financial incentives to do so. And by strong financial incentives, I mean a quota of paid parental leave available ONLY to fathers.

In a stroke of genius, the Swedish government introduced exactly that, back in 1995. Dubbed ‘daddy leave’, it constituted a month of non-transferrable parental leave at close to full wages. No father was forced to stay home, but if he didn’t, the family lost one month of subsidies. The policy had an immediate impact. More than eight in ten men took the leave. The addition of a second non-transferrable daddy month in 2002 continued the trend. Soon it became the norm for dads to take off a month, two months, even longer, and the culture at work – and at home – began to shift. Not only did the pay gap between men and women start to close, but men got a taste of what it was like to be the primary parent, assuming responsibilities traditionally left to mothers. The divorce rate went down, at a time when it was rising elsewhere.

Meanwhile, of course, I will never convince my father-in-law that a system of properly remunerated shared parental leave, including at least two months of paid daddy leave, is a force for good. Like columnist Liz Jones, who argues that extending paternity leave is a ghastly slippery slope towards men wearing fake mammary glands, my father in law’s worst fear is that shared parental leave could make men grow vaginas and become women within mere weeks.

While there is no hard scientific evidence that this is likely to happen (no, really, I looked everywhere, even in The Daily Mail), red-blooded men still unsure about whether or not to take up their fair share of parental leave should probably know this: most women love a man who can change nappies AND use the eco-settings on a washing machine. And when I say love, I mean lurrve. As in, want to fuck. So in a way, maybe it’s best if my father-in-law remains a dinosaur, because THAT would be awkward.

New guidelines on the Children and Families Act 2014, which includes the new legislation on shared parental leave, are expected to be published this summer.

6 thoughts on “Why the Hell Should Joe Public Pay for Paternity Leave?”