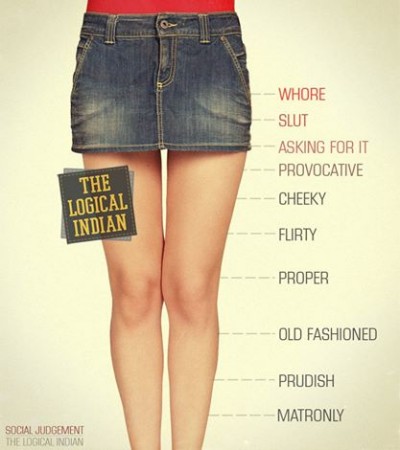 The issues facing women in India are not fundamentally different from those facing women in the rest of the world – the difference lies in the dire nature of the situation here. There is an enormous disparity of wealth in this country, with the rich being at least “6-ipads-and-4-cars” rich and the poor being “no-toilets-and-no-roof” poor. Fortunately for me, I’m closer to being in the former category, but that doesn’t make me feel even the slightest bit better about being a woman in this country.

When I was 13, I had my mother, a rather squeamish gynaecologist, give me “the talk”. Overall, between some awkward pauses and odd euphemisms for genitals, it essentially amounted to “spend too much time with boys and you’ll get pregnant,” which, while not entirely inaccurate, kinda glossed over some significant details. Thanks, mum. It was around this time that I started to question how it was possible that my own highly-educated mother, whose livelihood revolved around vaginas, had such illogical convictions about girls, sex and propriety. It baffled teenage-me quite a bit, but I had just gotten my period and my BMI was peaking so it was safe to say this was not the most important thing on my mind. Years later, as I think about it in light of the horrifying statistics about rape that bombard me constantly, I can’t help but come to some disturbing conclusions. 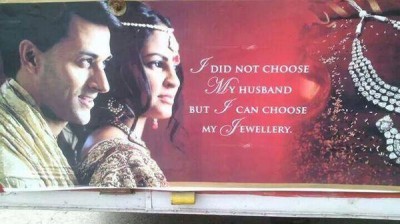 So here I am, this Indian girl. And the simple fact of this is a problem. There are several connotations associated with being an Indian woman and none of them are empowering. The assumptions are as follows:

1. You were raised properly

In this case, propriety is interchangeable with obedient, obsequious, submissive, complaint, malleable, even. These are adjectives the Indian patriarchy needs to associate with a girl for her to conform to the ideal of the chaste Hindustani Nari . Basically you’re a pet, who has been trained and trained well, to fetch the newspaper, cook, clean, be”respectful”, and if you have a degree or two well, that’s alright, I guess, as long as a man still wants to marry you. It all translates very efficiently into the perpetuation of women as second class citizens, dependents who need to stay that way. It’s dangerous to give women “too much freedom”.

2. You know your place

As my favourite feminist icon Chimamanda Ngozie Adichie said: ‘You can have ambition, but not too much’. Preferably less than but at the most equal to that of a man, never more. I’ve had my parents, relatives and the occasional misinformed friend tell me: ‘If you do all that, who will marry you?’. To these people I say, Tom Hiddleston might. Well, a girl can dream (just to be clear though, a girl can do whatever the hell she wants to do).

3. You adhere to the Good Girl code

Once again petted on the head and having her leash lengthened, the good girl is a lot like a golden retriever and can do no wrong, because being good means doing what you are told. I haven’t been formally inducted into this section of society, mostly because my ringtone is ‘BAD girls’ by M.I.A. From what I’ve heard though, the code goes: don’t show too much skin; don’t spend too much time with boys; don’t stay out late; don’t talk back; don’t drink; don’t dance; don’t smoke (this includes pot, I checked…twice); don’t make independent choices about anything including what should play when your phone rings (Shake your Pom Pom by Missy Elliot is also “a bad choice”, it turns out).

The crux of the issue in my opinion is that misogyny is considered a fundamental part of ‘being Indian’.

This is not an over-generalisation or a limited problem that haunts only the residents of rural areas where education is inaccessible, so before we launch into a ‘not-all-Indians’ backlash to this, how about we don’t? It’s the same thing as the “not-all-men” rape argument, pointless and unnecessary, just like Justin Bieber. In fact, if more people in India were familiar with the word ‘misogyny’ it would be a well-established, misspelled (Mishojenny) cult/political party by now. Misogyny is in advertisements, forced marriages and, of course, inherent to the biggest stain on the otherwise still pretty blotchy cloth that is India’s record – rape. Yet it is women who shame other women for making “bad choices” and it is women who criticise and control the lives of their daughters and daughter-in-laws, who shush the girls and tell them to cross their legs, and to not make eye contact, to come only when summoned and leave when dismissed from a room. In order to engage in feminist activism women need to seek the permission of men so they can go out and play with their feminist tampons, but they must make sure that they’re home before it gets dark because “you don’t want anyone getting the wrong idea.”

(The picture above says ‘Don’t go out wearing indecent clothes’ )

Indian society, for a predominantly brown population, is very white and uptight. It urges you to stay in the closet, to do all the “wrong” things under the cover of darkness without any witnesses, if you absolutely must. The people are repressed and regressive as hell – sexually, emotionally, and socially. There is a long-standing tradition of shushing and embarrassment that cannot be justified not matter how hard you try to. If I didn’t know better I’d think Omertà originated here with the fondness for pretending things didn’t happen, of pursing lips and turning away from a burning building and saying ‘what fire? I don’t see anything.’ The problem with all of this stupidity is that these attitudes are considered the essence of our culture: they are what makes Indians Indian, apparently. The fact that the girls don’t stay out late or drink, the fact that they put their husbands first and treat their husbands like gods. It is all this nonsense that India takes pride in that is ruining the nation and causing a large-scale exodus of a lot of “free-thinking” (if asking to be considered a person can be categorised as free-thinking) women.

It is a society which has far too much say in things that don’t concern it, a society which combines superstition and senselessness to produce, essentially, a giant bully of a state. There are exceptions of course, but as far as the majority is concerned, every choice you make is reflective of the way you were raised and when you stand up to your misogynistic upbringing, it reflects poorly on your family and their honour. Picture, if you will, a thermometer measuring respect. That thermometer is hung outside every house in the country, for everyone to see. When your incur society’s wrath by taking a decision in your own interest, the amount of respect in that thermometer drops and your entire family has to hang their heads in shame because of the disgrace you’ve brought upon them. It’s ridiculous, but this is a huge deterrent for women when they feel like they owe it to their families to submit to societal pressures and norms. Just another way of controlling an entire gender and brushing the most crushing issues under an imported shag carpet. 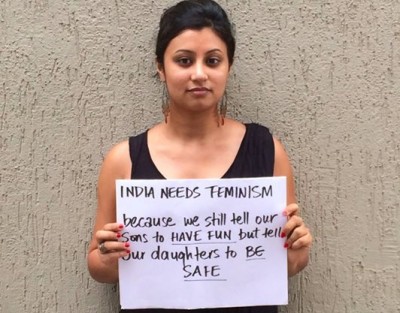 The youngest of girls are shepherded into believing that their lives are secondary, that women need a man, that girls have shelf lives, and that they are just giant walking baby incubators. It’s subtle at times and at others it’s like a pie in the face but, there is no doubt about it because, that’s how it’s always been. Now I’m all for the ‘things have always been this way’ argument. I mean, who can refute that? Well, I couldn’t possibly because I’m a woman and I need to stop having opinions and submit to the prevailing ideology. I’m told to do things a certain way because, while I may not get it now, I’ll thank everyone later for their coercion and complete dictatorial rule of my life. I’ve spoken to women who are victims of abuse and domestic violence and when asked why they put up with it they reply ‘He’s my husband, men need an outlet for their frustration. If your husband beats you, will you just walk out and leave your kid?’. Hell yes! But, I’ve been lucky, I don’t know what they’re really going through, I don’t share their desperation, and I have no idea what I would really do if I were in that situation.

Unless Indian culture adapts and society can resolve its daddy (or mommy) issues, it is going to be almost impossible for women to live here without fearing for their lives constantly. It comes back to the fundamentalist, fanatic and xenophobic misconception of what it really means to be an Indian woman. Wearing jeans, being out late, drinking, voicing your opinions, having a say in your life, all of these are looked on as Western infractions into an otherwise pristine culture. Do any one of these and suddenly people around you start calling you “modern” and, as innocent as it sounds, they don’t mean that as a good thing.

The entire culture has taken an oath, and meant it:

If a guy rapes you, your life will be ruined. He will be fine, so be careful. 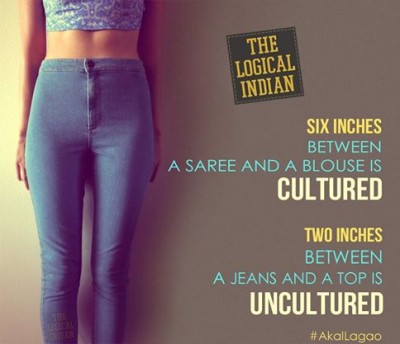 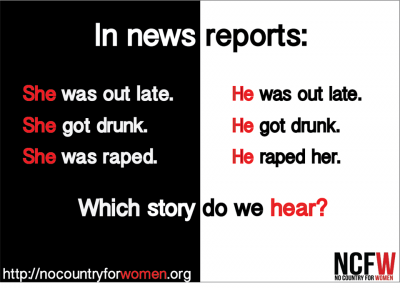 No Country For Women, a non-profit trying to raise awareness about these issues, is doing a great job of dissecting the issues plaguing the Indian community, including rape as a consequence of gender-policing.  Panic and resentment lead to unwarranted retribution, with men punishing women for daring to be themselves by raping them. What better way to put a girl in her rightful place, right? Bent over and fucked when there’s nothing she can do about it? There are many people starting conversations about these issues but on a large scale what needs to happen is a redefinition of what is means to be Indian and what it means to be an Indian women, ideally of course the definitions for both would be the same thing. I can only hope that with more of us speaking out and trying to stand up to the the oppression, progress is at least on the horizon.
- Vidhya Iyer
Further reading:
- Lawyer Strips Woman Because She Walked Her Dog
- 93 Women Raped in India Every Day (and those are just the ones reported)
- Rape: it’s your fault
- Five Year Old Kidnapped and Left For Dead

- That Hashtag was my Colleague

8 thoughts on “Why India Needs Feminism”