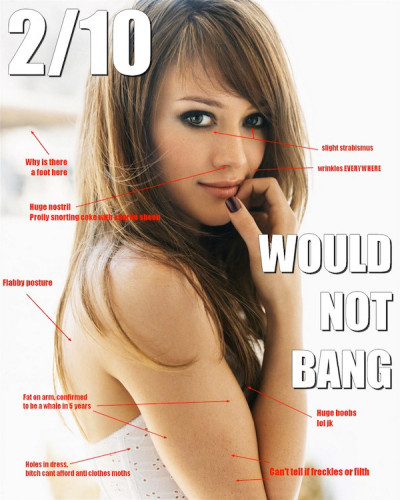 The Would Not Bang Meme mocks those who over-scrutinise women’s bodies, but the ‘would’/'wouldn’t’ language plays into the same narrative

Wouldn’t this be an odd scenario?

It’s summer. You’re dining, alfresco. The waiter brings out your deep fried calamari, or whatever it is you might find on an alfresco menu. Whatever it is, it looks pretty damn tasty. At that moment, three men pass by, one after another, on the adjacent pavement.

The first, you imagine works in law or finance, judging by his two-piece and white collar. His goofy Simpsons tie screams Father’s Day. He clocks your calamari, its succulent tentacles dripping in blubbery goodness. Its suckers are undulating just too provocatively for him to withstand. In fact, a stiffy is already erupting in the crotch his well-to-do trousers. It’s too much. He wants a piece of that calamari so bad, that he has to shout it loud for all to hear.

The second man is scruffier than the first. His trainers look like they’ve done some kilometres, he’s holding a fat notebook, and there’s a pencil jammed behind his ear. He turns his head with interest towards your table, and there is the calamari. It must be something about the way it’s served in such a hot, figure-hugging dressing, because this guy can’t take it either! He wants a taste of those perky suckers, and everyone needs to hear!

When this man is done ejaculating his disposition all over your quiet afternoon, a third passes by. He’s younger than the other two and a walking advertisement for Topman. By now, you anticipate a comment. But nothing prepares you for the aggression with which it is uttered.

‘I would fucking have that.’

In another world, the public appropriation of women’s bodies, by men from all walks of life, would require no metaphor to explain why it is not natural, and not acceptable. Comments towards women of the, ‘I would,’ phraseology are defended by the argument that it is natural for a man to find a woman physically attractive, and it is natural for him to feel that he would, given the opportunity, put his penis in her vagina. Yes, of course those things are natural, and perfectly human.

What is not natural, is the public vocalisation of that attraction in terms that totally disregard a woman’s right to choose whether or not she finds him sexually attractive, and whether or not she would have his penis poking about in her vagina, given the opportunity. The verb used is ‘would,’ which indicates a disposition of absolute certainty. It’s not, I might, or, I may have sex with this woman, if I asked her permission and she agreed. It is, ‘I would.’

There are hundreds of scenarios anybody may walk into in a day that bring about a feeling of bodily desire. We are, after all, beings attached to a body that has needs, and the desire to fulfil those needs keep us alive. As per the opening analogy, when we are hungry, and we see a juicy cut of steak on somebody else’s plate at a restaurant, our bodies respond. It would be odd however, a faux pas even, to openly express that desire by leering at somebody else’s meal, slathering and drooling all over their personal space, and aggressively communicating our desire to take what was theirs, right from their plate. After all, we’re polite people who wouldn’t like to make anyone feel uncomfortable. This begs the question, why do some men feel the need to publicly and violently express their sexual attraction to women in a manner that makes her, and those around her, feel uncomfortable?

In short, no. They cannot be justified. But they can be explained to a degree.

Many men believe themselves to have more of a right to women’s bodies than women themselves, and publicly communicating this through the means of aggressive language continually strengthens this belief, again and again, so much so that it becomes a cold, hard fact. Of course, there are those who will scoff, and declare this statement overblown, or even fictional.

Is it fictional then, that approximately 85,000 women are raped on average in England and Wales every year? Or that 400,000 women are sexually assaulted each year? Or that 1 in 5 women, aged 16 – 59, has experienced some form of sexual violence? Or that I could spin a globe and choose any country at random, and the statistics would be proportionally similar, and often higher?

Every time a man says ‘I would,’ whether it’s out of peer pressure, or nastiness or even if he doesn’t know why he said it, he is reinforcing the attitudes to women that lead to sexual violence. Hopefully, in drawing attention to the apparently microscopic, the apparently trivial, men and women who read this will think more carefully about their behaviour in these scenarios. Here are my suggestions:

Men, how about, don’t be so revolting?

And women, make sure you are the one to tell him that no, no he fucking would not.

46 thoughts on “Would You Really Though? Why I Hate It When Guys Say ‘I Would’”