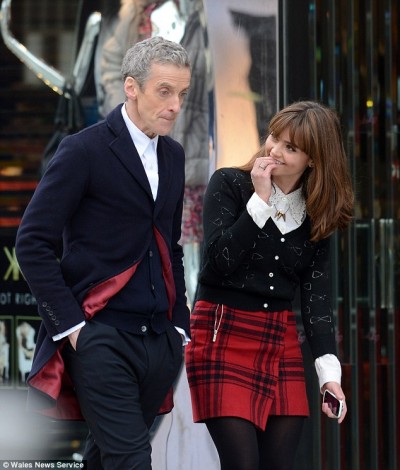 If you were looking for a show to represent feminism and 21st century women, I don’t think Doctor Who would necessarily be your first choice. For most casual viewers, the predominately female companions, or as they are woefully known, the ‘assistants’, are always playing second fiddle to the show’s main hero, the Doctor, and the show is often more about fighting off hostile alien threats and trying to stop the end of the universe than it is about women’s rights and feminist theory.

Doctor Who is rare for a British TV show, in that it is analysed in excruciatingly small detail in many online fan circles. And every fan circle, and every fan, will want something different from the show. Some will want slower and less frenetic plots that emulate the classic series, while others will be disappointed with episodes that lack high-concept stories and Hollywood-style FX. Many fans will want more romance and affection between the Doctor and his companion, while others would rather see the back of trite romantic subplots. Some fans will love writers than other fans hate. And some fans will want the show’s treatment of women to change. And I have to say I agree with them.

While I’m not a massive fan of his and don’t agree with every decision he makes, I think that current showrunner, head writer, and executive producer Steven Moffat does his job well. The show is so many things to so many different people, and Moffat’s job is incredibly difficult, but he’s managed to make every series of the show he’s worked on unique in some way, and has to be congratulated for writing some of the best episodes of the new run.  But one thing that has noticeably changed in the show, and that is the Doctor’s, and Doctor Who in general’s, treatment of its female characters.

The introduction of Clara in Series 7 made me think about this issue in depth. It didn’t help that she came after the ultra-fierce and slightly controlling Amy, but she had no agency and a lack of control. She was, for want of a better term, a Manic Pixie Dream Girl, who (and this is a quote from the show) was ‘’born to save the Doctor.’’ She was barely a character, she was a plot device with cute Sixties clothes and no solid character traits. (Seriously, what was up with that? She was a computer geek who’d never touched a computer, she was bossy while never doing anything that the Doctor didn’t tell her to- she was underwritten to say the least.)

I hate to say this, but most of the female companions in Doctor Who are often marginalised and pushed aside, Clara being no exception. Yes, I understand that he’s a two thousand year old Time Lord with wisdom beyond the realm of human understanding, but he’ll sometimes disregard his companions, making them feel like second best. The most notable example of this is Martha Jones, who walks the earth for a year to help save the Doctor and defeat the Master, and just about receives a thank-you. It didn’t help that Martha was fawning over the Tenth Doctor, who, at this point in the show, was still moping about like a mopey teenager over the loss of Rose.

Also, especially in the series that have been written and produced over Moffat, women are more often romantic conquests for the Doctor than they are individual characters in their own right. Clara seemed to have no motive for travelling with the Doctor apart from fancying the Doctor (until he regenerated into Peter Capaldi, that is) and to a certain extent, neither did Amy for the majority of Series 5. Even church head Tasha Lem, who appears in last year’s Christmas episode, ‘The Time of the Doctor’, was another excuse for Matt Smith’s uber-suave hipster Doctor to show off his intergalactic womanising skills.

River Song, who first appeared in Series 4, is one of the more notable love interests of the Doctor since the series started. At first, she was everything you wanted a female character to be. She was an intelligent, outgoing, independent woman. She was the Doctor’s intellectual equal, and she just happened to fancy him quite a bit. Though, whether this was through the writing process being rushed (which is understandable considering Steven Moffat also writes and produces Sherlock) or dodgy character progression, River’s unbridled energy all went into a slightly creepy romantic obsession with the Doctor, and it got to the point where River would have rather let the universe be destroyed than have to let go of the Doctor.

The Doctor’s companions are almost exclusively female, but the Doctor never is. And, apart from the fact that the Doctor has never been a woman and there would be some negative reception from some fans and certain areas of the press, there’s no concrete narrative reason why there shouldn’t be, and it would be fun to see what the writers would do with the show if the Doctor regenerated into a woman. One of the more coherent arguments against this is that the Doctor is one of the only non-violent role models for young boys in family programmes, though it wouldn’t be out of the question to see another male character on the show to undertake this role. It’s an ongoing debate amongst fan communities, but we’ve yet to see a female Doctor, and who knows when or if we will?

Whatever you think of the representation of female characters in Doctor Who, you have to admit women are underrepresented in writing and directing the show. Not a single woman writer has written for the show since 2008, and there have only been five female writers who have worked on the show since it started 1963. And while it can be argued that the show hires the best people for the job regardless of gender, surely one of the ways of getting better female characters in the show is simply hiring good female writers.

In response to the way the show is evolving, and partially because of the sudden increase in feminist thought and dialogue becoming popular and mainstream, Doctor Who has been discussed in feminist circles, and has many blogs dedicated to it, most notably Whovian Feminism, a US-based Tumblr blog with sharper and more-in depth analysis of TV than you’ll find in most national newspapers. And for every ‘’Ew no, too old’’ tweet after Peter Capaldi’s casting as the Twelth Doctor last year, there were people considering what this meant in terms of the women on the show, and writing detailed and elegant opinion pieces on it around the Internet. We engage with TV today in a way that has never been seen before, and with a show as big as Doctor Who, it’s only natural that feminism comes into play.

All that said, many of the issues I’ve spoken about look to be rectified in Series 8. The new incarnation of the Doctor is NOT CLARA’S BOYFRIEND, as she was told many times, and Clara now seems more like an actual person rather than a walking story arc. And only two episodes in, we’ve had some pretty cool and (as much as I dislike the phrase) strong female characters, such as Vastra and Jenny (who shared their first on-screen kiss… well, first on-screen exchange of oxygen), Journey Blue, who was one of the most interesting and compelling guest characters in a while, and was played by the brilliant Zawe Ashton, and Missy – who looks to be one of the weirdest, most wonderful villains the show has ever had. As per with an older Doctor, a romantic interest looks to be firmly off the cards.

So let’s not wage war against Steven Moffat yet, eh Tumblr?

6 thoughts on “Manic Pixie Dream Girls and Universe Destruction: Will I Ever Identify With a Woman From Doctor Who?”