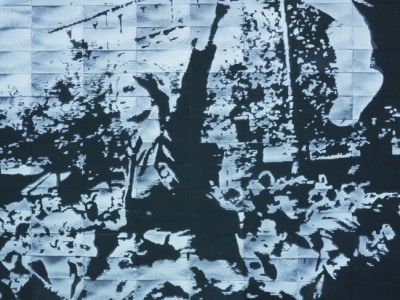 Friday 5th September saw the opening of On the Passage of a Few People through a Rather Brief Period of Time, Mary Kelly’s first gallery show in the UK in ten years. Installed at Pippy Houldsworth Gallery off Regent Street, the exhibition constitutes a fascinating development in Kelly’s oeuvre, both in referencing some of her most formative and celebrated pieces and processes, and by heralding an exciting new juncture in both her critical faculties and their presentation through divergent multimedia formats.

Many will be aware of Kelly through her inclusion within the Berwick Street Film Collective (see its seminal film essay Nightcleaners of 1972-5) as well as her later project and process-based installations completed over periods of time (years in most cases) such as Post-Partum Document of 1973-9. This particular work was an intimate and highly moving piece on the mother-child relationship, and employed items and statistical data revolving around Kelly’s young son. Personal mementos like bibs were placed alongside charts and analytical commentaries on speech patterns, all preserved and presented behind Perspex boxes employed as a parody of those used by galleries in minimalist and conceptual installations as a mode of institutional critique.

Indeed, some of you might be familiar with, or even recall, the media outcry at her presentation of faecal stains from her son’s nappies at the interim presentation of this work at the ICA in 1976. It had several of the tabloid newspapers moaning from behind suitably outraged headlines condemning Kelly’s work as a sign of social decline and an aberration of the arts. Many of the Vagenda’s readers will no doubt call bulls**t on the shaky morals of these rags and their heated cantankerous tones, given their usual accompaniment, mere columns later, by a barely legal Page 3 girl in her smalls.

At any rate, the potency of the new show, and Kelly’s re-appropriation of her 2004 work Circa 1968 as a catalyst for the accompanying new pieces within it, instigates a new provocation.  Circa 1968  utilises the iconic, potent image of a girl waving a flag in the crowd at the general strike in Paris in May 1968, recreating the image in lint on a monumental scale, and overlaying the surface with a projection of white noise that inflicts on it a diagrammatic translucent grid. 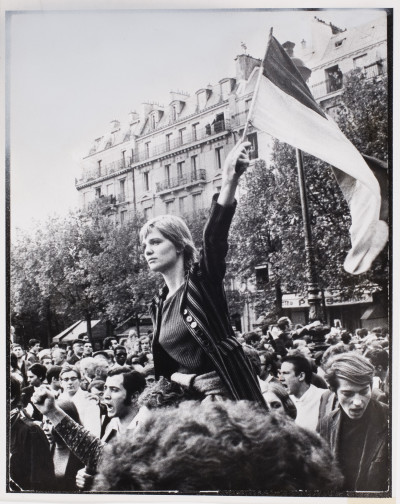 Strengthening the areas of discourse in which Kelly has long been one of the proponent feminist critics since the mid/late 1970s, the exhibition addresses some ‘classic’ Kelly themes of conflict and women in (the context of) conflict, alongside historic examples of liberation struggles, as well as the positioning of both personal and more macrocosmic sexuality and femininity. Furthermore, the content oscillates between the emblematic images and typography of the media and the narrative material more immediately associated with Kelly’s projects. This imbues this suite of works with a greater sense of detachment than has perhaps previously been a fixture of the artist’s installations.

I was incredibly fortunate to be granted a thirty minute conversation with Mary Kelly wherein we talked more about the relevance of this new show, its site-specific location in London (‘the place that inspired the work’) and the relationship of the project to her other work. One of my main points of interest in Kelly’s work in this show is the agency in her selection and how she goes about isolating images, particular those from the media, from which to work on. When asked about this Kelly said that the show was ‘an attempt to look at…the era that defines the past’. Referencing Stuart Hall, the eminent founder of Cultural Studies who passed away in February this year, Kelly spoke of the inherent belief within Cultural Studies as a discipline, that ‘you could decipher the media, and that is was actually something that made meaning and changed ideology’ and the optimism within this perspective that images could hold great power.

Clearly this show draws on the formative influences of the past – and specifically the dialectics proposed by postmodern ideology and the historical context of its emergence and the images that cite it– whilst simultaneously addressing a plethora of generations, including those not yet born at the time(s) the artist references.

The elegance in Kelly’s work, for me at least, has always been both her able navigation through and steadfast critique of, conceptualism, and the manner in which her feminist articulations are able to position such dialogues through aesthetically – and, more specifically, material – forms. This is arguably never more subtly negotiated than in this new show, which seizes obscure archival material, iconic imagery, personal photography from Kelly’s own collection and a public screen grab from ‘www.tahrir.com’.

However, whilst Kelly’s works draw on images, works, and historical moments from the past, they are, crucially, not purely nostalgic. This is, after all, not in any way a retrospective like that which took place at the Whitworth in Manchester three years ago, but rather a new project. Although the artist appropriates images from both a personal and broader, universally familiar past, they are done so through the prism of the now through their addressal of relevant contemporary issues through what might be regarded as an esoteric and critical deployment of Hal Foster’s ‘Archival Impulse’ (see October, Vol. 110, Autumn 2004). In her own words, Kelly aims to show ‘the forms of representation took up from the past and tried to use them in the present.’ If, as Foster would have it, the artist is, at times, an ethnographer, then Kelly’s methodology destabilises the linearity of such retrospection in several ways.

The first is through what has been referred to as the ‘durational’ quality of the lint medium first used by the artist in 1999 for her work, ‘Mea Culpa’. Produced as a cotton-based residue after tumble-drying clothes, lint is used by Kelly as an agent of texture, as well as a kind of semiotic memory. Compressed onto flat boards following a hands-on process using pre-cut vinyl templates, the lint gathers on the surface to create a relief, but is, importantly, not tampered with in the aftermath of its natural acquisition. Lint is the medium used to create these works, and can only be used in such large quantities after hundreds and hundreds of cycles in the dryer. This gives the works a sense of gravitas and of a heritage that undoubtedly exceeds the fragility of the medium itself.

Kelly’s destabilisation of the archive therefore begins at a fundamental level, and continues through the variety of sources she uses, in the newspaper front covers from Life Magazine and the rather more obscure ‘7 Days’ publication which enjoyed a brief lifespan in the early 1970s. Google ‘7 Days magazine’ today and the only result you’ll get will be a lifestyle blog about Dubai, which reminds us of the importance of Kelly’s archival process in preserving the ephemeral. Similarly, using lint to recreate the screen grab of www.tahrir.com effectively re-analogises the digital through Kelly’s ‘performative act of remembrance’ in a complex subversion of the modern methods of computerised cataloguing, whereby an abstract digital moment is remembered only through material application.

Ultimately, what is progressive about this show is what the artist referred to in conversation as the sense of ‘zooming out’ and distance that lends the content a more detached temperament. However, the ever-present personal quality of Kelly’s work is maintained and is fuelled by the critical re-working of remembrance through non-linear time structures, as well as the multiple generations of recipients for which it is targeted. This is a bold and brilliant development in Kelly’s own timeline that charts ongoing themes of women in the context of conflict, only gathered together to sharply question and explore the legacy of the past.

On the Passage of a Few People through a Rather Brief Period of Time is showing at Pippy Houldsworth until 4th October: http://www.houldsworth.co.uk/

With special thanks to Mary Kelly, Khuroum Bukhari and everyone at Pippy Houldsworth