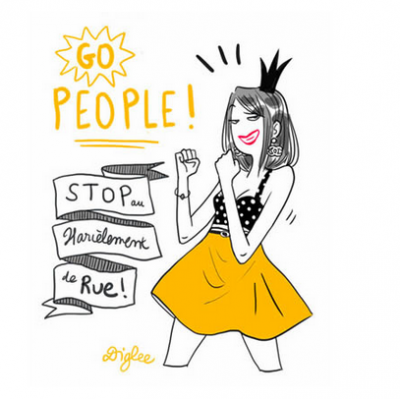 Images via and via

At a dinner party on Sunday night, the conversation turned towards street harassment in Paris, or harassment de rue. A friend, Mary, recounted the previous evening’s events. She’d had a great night but it had been spoilt by an incident on her way home. A man had followed her from the metro, offering to walk her home. She’d refused, saying that she knew her way and that she didn’t know him and so did not want him to continue walking with her. He insisted, saying that the area wasn’t safe. Mary got her phone out and threatened to call the police if he didn’t leave her alone. He said he’d leave her if she gave him a kiss. She refused and eventually he left when she started dialling the police’s number. The saddest thing about this story for me is that thanks to this man now Mary probably doesn’t feel as safe in her area as she did previously.

It sounds as though Mary managed to stay very calm and collected. Had I been in that situation, I don’t know if I would have been able to do the same. ‘You’d only make the situation worse’, I can hear people say.  But how many times am I meant to experience this type of behaviour before I’m allowed to get angry ? Why is it always the ‘victim’ in these situations who must remain rational and in control? It’s easier said than done, too. L’esprit de l’escalier, a French saying meaning ‘staircase wit’, refers to how it’s always afterwards that you think of the perfect response. In the moment, the shock of being harassed often means that words or actions fail you.

Last week, I asked for my brother’s opinion on another article I had written about life in Paris. I’d written that I get cat-called or harassed on a daily basis. He said I could only write that if it was true and for a moment I had a wobble and was filled with doubt. Later on I went about my day and had two unpleasant experiences in the street with men. Had my brother not raised the question earlier, I would not have remembered either of these incidents. That’s not to say that street harassment is harmless because women are used to it; instead these ‘interactions’ form part of a heavy burden that women must bear every time they go out in public. Whenever I step out of my front door now I wear invisible blinkers as a survival strategy.  Thanks to this, I think that about half of the street harassment aimed at me will go straight over my head, so the suggestion I’m being paranoid is ridiculous. The defensive bubble around me protects me from the less intrusive behaviours.

Without this bubble I wouldn’t be able to face going outside alone anymore. It’s a coping mechanism. It means not making eye contact with people, dressing in a manner that does not stand out from the crowd, etc. And this is sad as it restricts women’s life chances. As my friend Carys, a fellow newcomer to Paris, put it, “far from finding a new independent confidence in the city, an opportunity to embark on life as an individual and not shrouded by a comfort blanket of friends; I am finding myself more withdrawn than ever. And it’s a lose, lose situation! I avoid eye contact, dampen my spirits to appear less approachable and more serious and yet this tactic often attracts adverse attention – I look simply too miserable to be pretty! Men must intersect my path to make me look up in surprise, inform me that I am beautiful and ordering me to smile.”

Every other woman at the dinner had a similar story to share from that week. Being grabbed by men in the street outside a busy restaurant. Men putting their hands between girls’ legs in a nightclub. One friend had a guy run up to her in the street and scream in her face and then walk off laughing. All these small (or not so small) acts of intimidation add up to ensure that women do not feel safe going about their daily lives. The message from men is that your body is not your own and I can touch it when I like. Don’t get too comfortable  – the threat of danger and violence is never far from the surface. As a foreigner it adds another level of anxiety. In that moment after the verbal/physical/sexual harassment it’s often difficult to speak full stop, let alone summon what you’d like to say in a different language.

Why is this happening in Paris more than in the UK? This is not an issue specific to Paris and yet I have French friends who have spent time in the UK and British friends currently living in Paris and both are in agreement that the problem is much worse here. I’ve started to question everything. I’m blonde and that hair colour is a little rarer here and so I stand out a bit more. Could that be the reason why? Although that wouldn’t explain the harassment experienced by my darker-haired friends. Am I dressing differently? Like the above, this should be totally irrelevant but the fact is that it isn’t and anyway I dress the same as I have done for years – with only my face and hands visible.

Could it just be that attitudes towards women are different in France than they are in the UK? In the Global Gender Gap Report 2013 rankings the UK came 18th and France came in 45th, Germany 14th and Spain 17th, so at a political policy level at least, France is quite a way behind its neighbouring countries. I’m not for a second suggesting that street harassment is a thing of the past in the UK but the work of campaigns such as Everyday Sexism by Laura Bates has opened up a dialogue. In the UK cat-calling and other forms of street harassment can no longer be passed off as a little bit of fun; just lads having a laugh. I can tell my friends about the creeps in the white van (I know, such a clichéd scenario, and yet it continues) and everyone collectively groans in understanding.

France is beginning to have this conversation too. Only a few days ago one of the country’s biggest newspapers Le Figaro ran a story titled Harcèlement de rue : l’épidémie mondiale or ‘Street Harassment: the global epidemic’. Annoyingly, on the website this story is located on the madame pages, which suggests that it is only viewed as a womens’ problem. It may be a poor translation but the article also says, “subway cars and taxis for women exist in many cities to fight against insecurity of women in transportation”, the message that these schemes send are that women must change their behaviour to accommodate men’s. It’s concerning that France may be adopting this attitude too.

The French news recently picked up the story from the UK, about how Transport Minister Claire Perry has suggested that women-only London underground carriages would reduce the number of sexual assaults. The notion is classic victim blaming. If a women accidently sat in the wrong carriage would she have been asking for it? Do men not commit sexual assault outside of the underground anymore?  If Paris adopted single sex carriages I would simply stop using the metro. Would I then be looked down upon for taking the mixed-gender bus? Further research is also required into the everyday reality of life for women in France. The Le Figaro article states that ’20% of French women are insulted at least once a year’ on the street. This is a huge underestimation; try more like at least once a week.

Of course, it has crossed my mind that men are able to tell that my expat friends and I are not French and therefore we’re easier targets for these behaviours. So I asked one of my French friends if she has similar problems and of course she said yes. “I’ve mainly been verbally harassed  but recently I’ve been ass-grabbed, arm-grabbed, pulled towards him for a kiss etc. They just see us as objects of desire and haven’t been taught not to act upon that desire. Or they don’t give a fuck.” Since she has also lived in the UK, I asked where she felt the problem was worse. “Definitely Paris”, came the reply. Slowly  the issue is emerging in the collective French consciousness. There is now a campaign titled Stop harcèlement de rue! and through traditional media and social media they’re spreading the word in France that, ”this is not humor, it is not compliments…Many women learn to lower their heads, not to answer, cross the street or dress differently. In short, they feel less safe, less autonomous. Out of fear, they become less open to real encounters…and that’s a shame.” But this is the beginning of a long hard road to get street harassment recognised as a real problem which negatively impacts both women and men.

So far I’ve only been living in Paris for around six weeks and so for this observation to stand out against all the other daily new experiences speaks volumes about the seriousness of the problem. During my first week here, I had to take a train to the South of France. I’d just spent the previous month travelling around Europe alone and thought nothing of it. On the train I sat next to a girl; an ingrained habit – like walking home with my keys in my hand. At some point on the journey, two men sat opposite us. I was watching something on my laptop and happened to glance up and realise that the guys were taking photos of the girl next to me. She was either oblivious or doing a great job of ignoring them. Before I had the chance to stop myself I shouted, “No, stop. Don’t do that. That’s not okay”. From the looks on their faces I could tell that they didn’t understand but I had just made myself their next target. They started taking my photo and I just kept quiet and my head down. Everything that I wanted to say I couldn’t think how to say in French. I was bursting with anger, mostly at myself for my lack of French vocabulary.

Learning the language of the country where I live is my responsibility, but the French government has a responsibility to ensure that its citizens are safe. I’ve quickly learnt that the word I was looking for is arrêt and it simply means ‘stop’.  This is the start of my ARRÊT campaign. I refuse to let this dominate my experience of living in Paris any longer.

28 thoughts on “Harassment on the Streets of Paris – Why is it Worse Than in the UK?”