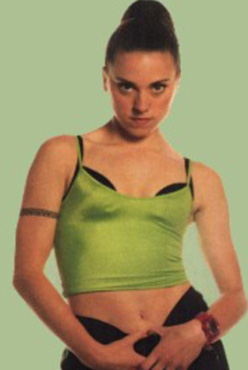 Mel C hit the newspapers lately by slating today’s generation of female pop stars as ‘vulgar and narcissistic’. Predictable media headlines ensued, replete with gratuitous arse shots of a pouting Rihanna twerking like some kind of demented booty-witch. Commentators were quick to point out that Mel C was known to favour and indeed rock a crop top on occasion, which, frankly, you would if you had the abs of The Chisholm.

Let’s be clear about this. Wearing no clothes or hardly any clothes – it’s no big deal. I’ve been known to rock a bit of under-bum out of my denim shorts on occasion. Female pop stars using their sexuality to sell records- well, hello respected musical artists Kate Bush, Stevie Nicks, Madonna (OK, semi-respected.)

But Mel C was always my favourite Spice Girl, the one who put up with having to wear shiny polyester throughout the nineties and had a nose ring and who could actually sing, and I’m inclined to listen to what she has to say and forgive her almost anything (apart from SpiceWorld The Movie. No one can forgive that.)

And slamming Rihanna for being ‘vulgar and narcissistic’ is fair. In one sense at least. See, the thing is, the Spice Girls were actually pretty fucking vulgar. So Mel’s a bit of a hypocrite there. Remember Geri’s outfit at the Brits ’97? Her sister sewed a Union Jack tea towel on a dress so short that there was literally a triangle of black cotton separating her vag from, well, the entire world. If that’s not vulgar than I’m not quite sure what is, really. Maybe when Posh went all ‘urban’ and started wearing slashed leather crop tops and see-through string vests and hanging out with Dane Bowers and True Steppers?

As an aside: let us never, ever forget that collaboration she did with Dane Bowers and True Steppers.

And in any case, criticising a pop star for being vulgar is like having a go at a rock star for being into drugs, or an EDM DJ for being a hollow-eyed money-grabbing whore who sold their musical credibility down the river for the promise of a Las Vegas residency and £££. Basically- what did you expect? Pop music has always been about vulgarity, and that is what makes it wonderful. Bjork as a swan. Elton John in a pink satin suit. All vulgar and all pretty fucking fabulous, actually.

Being vulgar is fucking great. Because what’s the opposite of vulgarity? Being demure. Proper. Dressing appropriately. Not speaking your mind. And who wants a generation of matchy-matchy pop princesses in twinsets and pearls? No one.

But, being narcissistic: well, actually, fair dos to Sporty for pointing that out. Because something has changed in our generation, and not in a good way. Rihanna and co. do embody narcissism, and it’s damaging our girls.

See, when me and my friends used to dress up as the Spice Girls and do the routine to Stop (which I still remember to this day): well, we were having a laugh with our mates. We were dressing up to be the Spice Girls, to embody their different personalities and personal styles, and I don’t remember ever looking in the mirror that much, really.

We weren’t taking selfies and putting Instagram filters on them and photoshopping out our teenage acne so we looked more attractive to older guys. We were just having fun. Online wasn’t even a place then. It was just Top of the Pops on a Friday night, and fighting with your sisters over which one got to be Baby (everyone wanted to be Baby). It was platform trainers and Union Jacks. Dare I say it? It was innocent.

Narcissism is a logical by-product of an age in which everything is instantly documented, manipulated and posted on social media. Under such intense scrutiny you can’t really fault young girls for becoming narcissistic. They take their cue from the role models that are available to them: women whose social media presences are massive, every IV drip or finger tattoo or fast food meal they’d never actually eat posted on the internet for mindless, instant click-likes and retweets.

When I look back at the Spice Girls now I’m struck by how – well, budget they look. They look like a bunch of girls who did their makeup themselves in the back of the tour bus on the way to their concert, all badly-blended eyeshadow and streaky highlights. Essentially none of them changed their (normal sized) outfits for the best part of a decade. And that’s their charm, and that’s why we loved them. They looked like your big sister’s mates would look like as they swigged white wine before a night out on the tiles. Compare that to Rihanna, who switches from dominatrix to stripper to Bajan princess faster than you can say ‘Beyoncé lift fight’).

When sustaining the momentum in your career basically means keeping the entire internet entertained, every day, changing your look almost daily becomes a pre-requisite if you’re going to keep people entertained. You can try to sepia-tint it all you want: making yourself click bait for the masses essentially turns you into a narcissistic, pouting moron. If the Spice Girls started today, everything we love about them: their wobbly bits and dodgy tracksuits and bad hair and manic energy, would have been worn away and made smooth, corroded by the internet until all that was left was gloss and polish.

And this is why Mel C was right on one count: being narcissistic isn’t okay, and it definitely isn’t Girl Power. Unless you’re Instagramming yourself high-kicking Richard E.Grant in the desert. In which case, I’ll make an exception.

11 thoughts on “On Mel C and Rihanna: Why the Spice Girls Were More Girl Power Than G-strings”