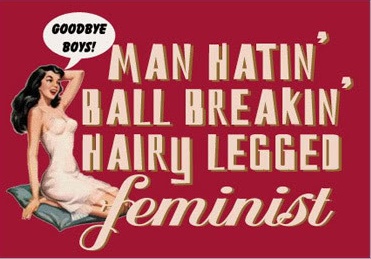 Feminists! Stop burning your bras for a second and listen up: feminism has made you bad in bed.  Fortunately for us all, Men’s Health have brought this key piece of information to our attention as part of their groundbreaking list of ’15 Ways To Turn A Good Girl Bad’. Australian Men’s Health and Yahoo have teamed up to solve the big Feminist issue that has been casting a shadow over the lives of men across the planet, which is lazy lady partners who plain suck in bed, or as the case maybe don’t suck enough, amiright lads? Luckily Men’s Health recruited the help of not one, but SIX, sexperts to help rectify their readers’ other halves poor performance in the sack.  The key thing to remember here is that women need to be trained in the art of pleasing men sexually, much like a dog needs to be trained not to shit in the kitchen. Those innocent little dolls can’t be expected to harbor an innate sexual appetite; they require some male teaching to turn them into ‘bad girls’ in the bedroom.

One piece of advice from the column is:

“In the past few decades, women have learnt that orgasms, like voting and equal pay, are their right,”

This tide of female emancipation has led to a “princess-and-the-pea syndrome” – her “pea” gets all the attention, while everything else gets sidelined.

“The pea’s demands will eclipse those of your penis,” warns Spurr. So stand up for your rights, man!”

So there we have it! All these luxuries like voting and equal pay have made you into a demanding princess obsessed with the ‘pea’ rather than the peen. By pea, I mean clitoris, obviously. Clitoris is such a vulgar, unladylike word though, just like vagina, which Men’s Health has helpfully renamed the ‘tunnel of love’. It would appear that for the editors of the Aussie Men’s Health time froze in the good old days when the female libido was a myth, a man owned his wife and sex existed only for male gratification. In this parallel universe where women’s liberation hasn’t yet begun maybe Men’s Health feel it acceptable to encourage men to take decision making away from women.

The author presents a woman’s advocacy in a sexual relationship as inconvenient to men and something that should be manipulated to male advantage. The title alone upholds the oppressive slut vs. prude paradigm by using good and bad girl stereotypes. It’s truly offensive to both men and women to suggest facilitating a female orgasm and catering to female sexual needs comes at the cost of male sexual fulfillment. Perhaps the most shocking part about this article is that it’s written by a woman. A woman named Siski Green who is the published author of real, actual books about sex. Additionally five of the sex experts quoted are also female. The mind boggles.

Here are a few top tips to make your lady great in bed ‘without her even noticing’:

‘If she’s shy, tires easily on top (or she just doesn’t fancy you), turn her around to face your feet’

Don’t let a minor detail like physical or emotional attraction get in the way of getting laid. If she doesn’t fancy you just turn her round so she doesn’t have to look at your grunting sex face- problem solved!

“Getting her to the level of orgasm can be a hard slog,” admits Spurr. So stage your own industrial revolution and bring some machinery to bed.

Men’s Health recommends using a sex toy to reduce the effort required in achieving the tedious female orgasm. It’s best just to get it out of the way as quickly as possible so your partner can focus all her attention on your pleasure alone.

If her tunnel of love doesn’t feel as snug as you’d like, sign her up for a pilates course.

As we all know there is nothing worse than a woman with a baggy vagina. If your lady’s fanny isn’t providing a ‘snug’ fit then just forcibly send her to an exercise class.

Chastity seems an odd tactic for sex-life improvement, but stay with us. “Sometimes women become sexually defensive or shy, because their partner is always there first, asking or angling for some action,” according to relationship counsellor Paula Hall. “Stop asking and you may find her sexual appetite gets the better of her, revealing a hunger that brings out her more confident side.” Try backing off for 14 days.

If you partner is particularly uncooperative in meeting your sexual demands then consider emotional manipulation. Withholding love and physical affection should coerce your beloved into putting out.

“By wearing a blindfold, you allow her to explore her naughtier side without feeling self-conscious, like she’s being observed or appraised,” reveals Dubberley. But hopefully not so naughty that she nips downstairs to watch Neighbours.

Despite the clearly top-notch quality of advice provided by Men’s Health, a guy can never have enough information when it comes to the perplexing mystery known as woman. I have a few of my own sexpert pieces of advice for dealing with those pesky modern women and their peas. First and foremost always remember that women are not walking vaginas there to service the sexual needs of men. Sex is most enjoyable when both partners feel comfortable and open. Ask your ‘princess’ about her sexual preferences and tell her about yours. Using two-way communication will increase the intimacy between you and your partner. Discuss your desires together in a respectful manner and then only act them out with the agreement of both parties.  Trying to control a woman’s sexual performance ‘without her even noticing’ is not only dancing dangerously upon that line known as ‘consent’, but also a guaranteed ticket to a failed relationship in addition to your miserable sex life.

15 thoughts on “Sex Tips for Misogynists: How Feminism Made You Shit in Bed”