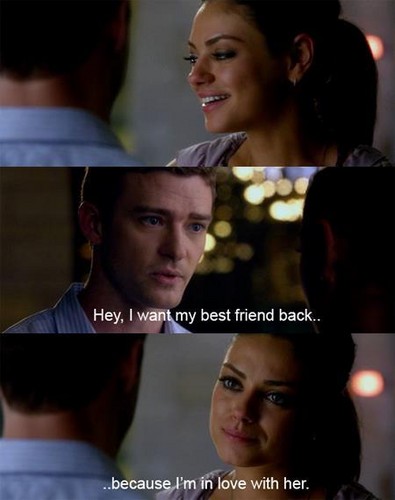 “So, Wallace, we should talk about the complex issues of our time. Can men and women be friends or do you secretly want to bang Chantry?” (What If, 2014)

When Billy Crystal Met Meg Ryan, Hollywood taught us that it is not “the sex thing” that “gets in the way” of men and women being Just Friends… but the love thing. A quarter of a century later, What If, Daniel Radcliffe’s first rom-com outing, spins the same conservative idea.

Remember rom-com land circa 2011? Friends of the opposite sex didn’t waste the entire movie wondering what they look like naked. The minute Adam and Emma (a.ka. Ashton Kutcher and Natalie Portman in No Strings Attached) were left alone, their fig leaves came right off. Still in La La La Land, Justin Timberlake and Mila Kunis became Friends with Benefits as early on as the trailer.

On the face of it, 2011 was a brief interval of liberalism for consenting adults in heterosexual Hollywoodland. Except that casual sex was redeemed by love by the time the credits rolled: 0% of participants ended their relationship completely; while 100% converted a friends with benefits relationship (FWB) into a happily-ever-after.

To get to the bottom of the matter, I did some field research. Though my own FWB bears little physical resemblance with Justin Timberlake, there were some encouraging similarities: we’ve both been around the block and as a result, like Justin, he is “done with the relationship thing” and “emotionally unavailable”, while, like Mila Kunis, “I’m emotionally damaged.” So we followed their lead and decided to try safe sex. Sex without emotions. To mix things up I lifted our “ground rules” from Ashton Kutcher and Natalie Portman’s FWB: “No lying. No jealousy. Don’t list me as your emergency contact. I won’t come.” My FWB confirmed that it was a meeting of minds:“Are you implying that we are not getting married and living happily ever after? What am I going to do with the white picket fence I just bought? I couldn’t afford the house, so I just got the fence.”

It was a meeting of bodies, too. Journalist Chloe Angyal’s analysis of sex, friendship and love as portrayed in rom-coms resonates: “Hollywood still wants us to think that honesty about sex is impossible in romantic relationships. When you’re having sex with a friend, you don’t have to fake orgasms, withhold constructive criticism of sexual technique for fear of offending your lover, or camouflage your repulsive body with flattering lighting.”

Just friends. Who have sex. A lot. We share an Excel spreadsheet on Dropbox and fill in the time, location and number of times we want to have sex. We do the ratings orally. On cinema dates, I go commando under a long skirt. He likes a “chocolate swirl” (finger up the arse), and isn’t afraid to ask. Reporting a couple of months in, the FWB relationship is exciting, liberating and mutually satisfying.

Just friends. Who have sex. And boundaries. As a feminist, he is comfortable forgetting to take his credit card on a dinner date. Meanwhile, I don’t do bedtime tooth-brushing together in front of the mirror. We discuss work problems (his helpful response: “You lost me at hello”) but we don’t build each other’s IKEA furniture or help each other move houses. We both have former lovers for that purpose. Mine builds furniture on film sets. His has a car.

Just friends. Who talk dirty. “Are you all right, baby?” in my FWB’s mouth sounds like a breach of contract. Luckily I learned to be wary of the treacherous effects of oxytocin – the so-called bonding hormone unleashed by sex – back when Mila Kunis was dumped in the Friends With Benefits trailer:

– You said that I was your soul mate!

Just friends. Who rate each other. I barely registered when my FWB responded: “I adore making love to you” to my: “I love fucking you”. He is Latino.

Just friends. Who have (intimate) sex. As my FWB pointed out during a post-coital recap: “Good sex is about fusion. You need emotional maturity. That’s why teenagers can’t be good at sex.” Neither of us are teenagers. So is Mila onto something when she asks JT:“Are we getting too old for this [casual sex]?” Sex blurs boundaries. A sexual relationship cannot be static. It intensifies or is discontinued. Sexual intimacy not only resembles but requires emotional intimacy. If being deeply and intuitively in tune with another person’s body means tapping into their most private emotions, is Hollywood right in asserting that (very good) sex is the premise to, dare I say it, feelings?

Just friends. Who have sex. With other people. After a swift exit from my FWB’s bed just minutes before his former lover arrived to help him move out, I briefly considered sitting in a café around the corner from his flat to catch a glimpse of his former FWB. Then I remembered that’s what Facebook is for.

When Ashton Kutcher gets a tad clingy Natalie Portman tells him: “Monogamy goes against our basic biology. Go hook up with someone else.” I made the most of that sexually-fulfilled aura Cosmo sells us: “having good sex seems to attract more sex. […] When you’re having great sex, it shows in your body and face, says Dr. Ian Kerner. That’s because orgasms make you feel good and sex also gets your blood pumping, which gives you a glow. You may even give off a different scent when you’re having regular sex.” Whether he smells a rat or not, on a conscious level my FWB doesn’t know who else I am having sex with, and when he says “not tonight, darling, I have dinner plans”, I don’t ask.

Just friends. Who have sex. Diaries allowing. Working with hidden agendas is tricky. Our group of friends doesn’t know what we are up to – or pretends not to – which means two cab fares home to the same address after a night out. Turns out making sure that a sexual relationship stays casual demands as much investment as a conventional relationship. Even far away from Tinseltown a ‘no strings attached’ relationship is the stuff of fairy tales. It’s merely a different set of ties. Just as entangled. If not more so, because the binding rules have not been codified by previous generations.

Just friends. Who argue. Tips on how to improve my FWB’s French have turned into a “constant need to undermine” him. Calling to say absolutely nothing à la When Harry Met Sally is not cute but “fucking awkward”. Retaliation was embodied by (electric) tooth-brushing over the phone – “because the white noise will cover the silence”. As tooth-brushing twosomes are my pet hate and I don’t own an electric toothbrush – that is something I still do manually – re-retaliation was not an option. I felt undermined. Fortunately, we still agree on one thing: neither of us likes our job much these days.

Just friends. Who (don’t) have sex. Conventional wisdom links arguments to emotional involvement. They call it tough love. Arguments have replaced sex. They call it a relationship. Shockingly, my field research has shown that my real-life FWB outcome has little in common with a Hollywood ending. Perhaps it’s not so much a case of a friend with benefits as a boyfriend without benefits.

One thought on “Will My Friends With Benefits Setup Get Me a Hollywood Ending?”