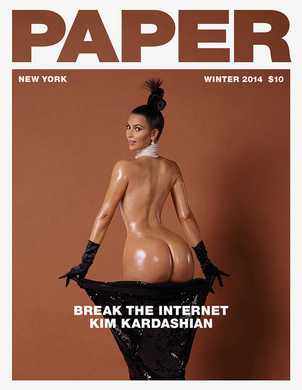 Nudity is great. Or, at worst, fine. It’s natural, it’s free, and it’s achievable by absolutely everybody. One of the most common misconceptions about feminism is that it is some kind of anti-sex movement with a fear of nakedness and sexuality, which is what makes endlessly re-occurring ‘debates’ about ‘can I wear a short skirt/ take naked selfies/ slut-drop and STILL be a feminist?’ so relentlessly boring (You can do all these things if you so wish, and more!! Feminism will set you free). Yet, for all the naturalness and normality of the naked female body, it rarely escapes the imbuement of misogynistic attitudes and meanings, and nothing reminds us of this fact than reactions to nude bodies in the public domain of celebrity.

Probably the two biggest stories of 2014 concerning the naked and famous female body hit headlines this autumn: the celebrity photo-leak of September (also known by the unsavoury moniker “the fappening”), with victims including Jennifer Lawrence, Kate Upton and Kaley Cuoco, and, secondly, Paper magazine’s attempts to #breaktheinternet in November with nude photographs of Kim Kardashian. Both stories were ‘born’ online, and thus garnered a predictably passionate response from social media users.

The photos of Kim Kardashian and Jennifer Lawrence were taken and distributed in completely different circumstances, with the most significant difference between the two being consent. Kim Kardashian posed nude for Paper Magazine’s #breaktheinternet issue voluntarily, presumably with the knowledge that as she is probably one of the most famous women in the world right now, the images would be viewed by a LOT of people. Jennifer Lawrence, on the other hand, sent the photos to a boyfriend she was in a ‘loving, healthy and great’ relationship with, whom she trusted. She very reasonably did not expect the photos to later become available for public consumption, despite the justification made by internet perverts that if she did not want the photos on the screens of basement-dwelling wankers internationally then she should not have taken the photos privately, in her bedroom, in the first place.

Both women posed naked, one publicly, and one privately. The one who utilized her agency as an autonomous human being and chose to sell her naked photos was slut-shamed, branded an irresponsible mother and role model and met with disgust and outrage. The one whose privacy and agency was violated was told that she should not have taken the photographs in the first place. What sort of mixed message do women receive from this no-win situation? Consciously choosing to showcase female sexuality in the public sphere will not be tolerated, yet private celebration negates a woman’s right to her body. How exactly is a woman meant to conduct her sexuality and her body in this day and age?

Kim Kardashian’s pictures are not the pinnacle of female empowerment; there are massive racial and cultural issues with the photos. She is perhaps not the best role model for young girls and Paper Magazine has not particularly broadened the variety of images that women are bombarded with on a day-to-day basis. Ultimately, the photos simply reinforce the unrealistic, unachievable beauty standards imposed upon women today. However, the attitude which screams ‘put it away, you bad mother! You awful role model! You attention-seeking slut!’ to Kim Kardashian but actively seeks out Jennifer Lawrence’s private photos despite the fact that ‘I didn’t tell you you could look at my naked body’ (Jennifer Lawrence, Vanity Fair) is an attitude reflective of societal expectations and ideals of female sexuality.

How should the perfect woman manage her body in such a confusing climate? Should she get it out, put it away, keep it to herself or hand it over? Perhaps she would be coyly sexual; in public, ladylike and demure, pretty but never hot. Not overtly sexual – not like that “slut” Kim Kardashian. She would have a private kind of sexuality, one that a man can chase, discover, then own it and dominate. She would wear tea dresses to meet her boyfriend’s mum, then later in the evening, a black negligee as she is coaxed into fulfilling all his sexual fantasies. She would be both the Madonna and the Whore. The leaked photos of Jennifer Lawrence ignited this fantasy in men and allowed them to enact it in a virtual reality.

The perfect woman does not have a public sexuality, just a private and fully malleable one that is owned by a man. These ideals revolve around the male ego, a fantasy dreamt up by the same guy who invented the concept of virginity and chastity – that a woman hands over her purity to a man and is irrevocably changed thereafter. It is a fantasy that leaves women open to being shamed for either being prude and frigid or loose and slutty. It teaches women that girls who have too much fun don’t get married, but that husbands cheat on wives who don’t put out. It causes men to feel shortchanged by women they expend their time and energy on, only to be ‘friendzoned’ and denied access to the sexual body they thought they were ready to uncover.

So what do women learn from Jennifer Lawrence and Kim Kardashian’s naked photos?

Ultimately, that we cannot win.

We will never fulfil the ideals of the perfect woman with the perfect sexuality. Our bodies are public property, game for judgment by anybody and everybody. Weirdly, however, this can be kind of liberating. To take an optimistic approach, perhaps as there is no way to perfectly negotiate your body, you may as well do whatever the fuck you want. If someone rejects you for having too much or too little sex, know that their brain is the size of a pea and move on, safe in the knowledge that it is their issue and definitely not yours. Say ‘yes’ and ‘no’ as much or as little as you please. Show as much or as little skin as you want. Mix it up and wear bodycon dresses on Mondays then jumpers and woolly tights on Tuesdays. A more equal society is not one where women feel pressured to be more or less any which way but one in which women feel no pressure at all. So let us look towards 2015 as the year in which we start to own our bodies, and do whatever the hell we want with them.

6 thoughts on “What Can Women Learn From the Celebrity Nudes of 2014?”