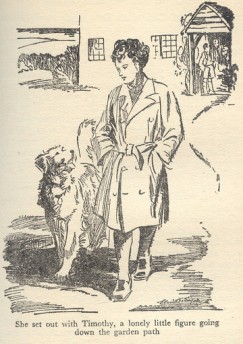 George from the Famous Five – another girl who defies gender expectations

Tomboy is a thing, right? It’s that phase that some little girls go through, where they don’t like pretty dresses and they do like playing at cowboys, where they rebel against their mother-imposed white tights by destroying them climbing trees, and they stare blankly at a dolly before pulling its head off to see how those magic blinking eyes work.

Not to worry though: it’s a phase. I’ve seen it in the films. Tomboys grow up and suddenly flower into prom queens: the handsomest boy in school sees their beauty through their torn jeans and, crucially, the girl realises she could was beautiful all along when she pops on a pretty gown and a bit of slap. Or sometimes they become successful with their talents: football stars or white coated science geeks who pull out their pony-tails and let down their flowing locks to reveal the attractive, proper girl underneath. Society is happy. Everyone relax.

But just sometimes, so-called tomboys find themselves on another path. They grow into butch women and realise they don’t want to be a prom queen – they’d rather be with a prom queen. This is OK too (or it should be - on the way to acceptance you may well suffer some horrible abuse from small minds). Much like being a tomboy, being a lesbian has a designation and definite parameters. It’s a thing. Your mother will eventually come to believe it, even if she suffers from intermittent voice paralysis and is only ever able to silently mouth that ‘L’ word to Marjorie and Vi at the tennis club. I’m not minimising the prejudice that gay women suffer, but at least society acknowledges you exist, even if it continues to be a dick to you.

But what if neither of these things happens? What do we do with a hetero butch girl (ear-lye in the morning) who doesn’t grow out of it? Hetero Butch Girl is not a thing. Our society is at last just about coming to terms with sexualities other than straight, but non-standard gender identity is still officially weird. There is no designation for this particular abomination.

What to do? Best not to acknowledge it at any cost, reader.

Laughing it off is a good option:

Butch girl: “Oh god, not another wedding. I hate having to put a dress on. I never feel comfortable.

Real girl: “Ha ha! You’re hilarious! ‘Not another wedding!‘ What are you like?”

Or you could assume a temporary lack of self-esteem on the part of your friend (a nice makeover should sort that out):

Butch girl: “No, I never wear makeup. I can’t be bothered to find the time and to be honest it feels weird and I just prefer the look of my own face.”

Real girl: “Oh but you’ve got such great skin and look at those lashes: let me try a little bit of mascara on you. I’ll make you feel fabulous!”

Or an unfortunate fashion disability?

Real girl: “Let me come shopping with you. I’ll find you something gorgeous.”

Butch girl, in silent, furious monologue: “Let me come bloody shopping with you and I’ll find you something I like and we’ll see if you’d like to wear it.”

However, Real Girls, if it gets serious and your Hetero Butch Pal is inconsiderate enough to want to talk candidly about it (awkward), even if she seems happy to describe herself that way, denial is your best option:

Real girl: “Oh you are not butch!”

Butch girl: “Aye, right enough. I speak with a deep voice and have never once batted my eyelashes. I sit with my legs apart, keep a pencil behind my ear and scratch my head when I’m thinking. I have more of a swagger than a mince. I order a pint and stand at the bar talking happily to old men who don’t notice my true gender, but hen nights and Topshop fill me with abject terror. And every time you wax lyrical about your new mascara brush, I’m daydreaming about my new Stanley knife. I’m not butch like Rylan’s not effeminate.”

Oh god, she’s taken it too far with the honesty now. It’s almost like she doesn’t understand that being a butch girl is not a desirable thing. Proceed to emergency measures: just CONFIRM AND THANK GOD SHE’S NOT GAY.

Butch girl: “No, no, I fancy men, who fancy real females but tend to accept me as one of their own. Thank god I’m not part of the LGBT community where women like me are accepted and sometimes even considered attractive.

Now I was lucky to have parents who loved and nurtured me just the way I was, and that includes my poor glamorous mother who got but three years of longed for frilly pants and broderie Anglaise before I turned tomboy, and who struggled bravely to hide her disappointment when I didn’t have a clue what to do with the baby doll and pram which Santa Claus delivered one year (incidentally, my mum and I share a love of shopping: I love finding and dressing my mother in beautiful, pretty, sparkly things. And she helps me shop for things that I like. Non-standard gender identity does not in fact preclude one from taste and style). But, in spite of that, by the time I was four I already had a sense that because I put Barbie in Action Man’s jumpsuit and parachuted her down the stairs and did not ever want The Pink One of anything, I was not a proper girl.

And that notion can really mess with your head for a long time.

You might snog boys before you’re ready because that’s what real girls do and then develop a bit of a fear of intimacy which stops you from being open to people who actually like you just as you are. You might spend your life feeling completely blue in clothes shops because there is nothing there that you feel good in, and that’s because you’re not good enough at being a girl. You might become suspicious of perfectly nice ‘proper girls’ because they represent every societal expectation that you just can’t meet. You might go all weird on your body and conceal your perfectly functional legs for years until you come to love riding a bike so much you just can’t keep out of shorts any longer (and finally realise that those muscley things might not be proper magazine girls’ legs but they’re awe-inspiring in lycra). You might get married and positively thole the wearing of the wedding dress.

It might in fact take the amazing process of growing and feeding a baby for you to be finally convinced that, butch as you might be, you are definitely a “proper” woman.

Strange but true. Gender identity and sexuality, no matter what your other talents and achievements, are central to your identity and what you feel society expects of you, even if you appear to exist in the mainstream. Straight women should dress up nicely and catch a man. “Hey there, Georgy girl, why do all the boys just pass you by? Could it be you just don’t try or is it the clothes you wear?” Jim Dale, how I love that song and wish I’d never properly read your lyrics.

Well, this Georgy Girl is finally convinced there’s no other Georgy deep inside. And the dowdy feathers are just fine for flying, thanks very much. In fact, they’re not bloody dowdy and they’re almost certainly more practical than yours.

So I’m asking, can we make it a thing now, please, the butch straight woman? Someone think up a name for it because, at the age of 34, I’m ready to be out and proud.