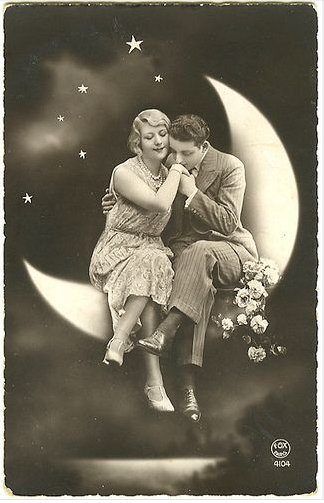 Next summer I will be getting married to my kind, funny, smart best friend, and I could not be happier about that fact.  I’ve known since about a month into our four-year relationship that I want to spend the rest of my life with this lovely human being, and although I was not expecting him to propose (on my birthday, in Paris – I am 100% keeping this man), I can think of no good reason for us not to make this commitment.

Happy as I am, however, several things have been bugging me since we got engaged; none of which are to do with him or our relationship.

The first niggle came within about half an hour of him popping the question. We were sitting in a café with my younger sister (following an impressive jumping up and down session from her), drinking, calling relatives and chatting.  At one point, she declared emphatically “We are going to get SO thin for the wedding”.  The discussion moved swiftly on; but the comment stuck, mostly because the same thought had occurred to me, albeit fleetingly, as I was walking across the Seine with my new fiancé to tell my sister.

It seems to be a given that brides (and often bridesmaids) will lose weight (and desperately want to) for the wedding.  It is a message that is repeated to us so often in the media that it’s been accepted as part of the pre-wedding process.  A quick Google search for ‘pre-wedding diet’ brings up thousands of results for meal plans, exercise plans, quick diets, long diets, celebrities revealing their secret diets. It’s overwhelming and depressing.

I had just found out that the person I respect and love most in the world wanted to spend the rest of his life with me, and, despite being a pretty sensible person most of the time, one of the first things that occurred was me was the thought “I’d better lose some weight.”  Now, there are parts of my body that I don’t completely love, but one of the side effects of a loving relationship is that I am happier in my skin than ever before.  This, however, did not stop such poisonous thoughts sneaking into my brain.

Fortunately for me, I was saved from embarking on any pre-wedding diet by two of the wonderful women in my life: my step-mum and my soon-to-be mother-in-law, both of who banned me from trying to lose any weight (I think partly because everyone who knows me knows that hunger turns me into a demonic being).

I’m not saying that losing weight for your wedding,  if that’s what you want to do, is wrong. However, the fact that the wedding powers that be (aka bridal magazines) assume that looking and feeling beautiful can only be achieved by replacing carbs with cayenne pepper for 6 weeks is highly damaging and symptomatic of the ever-present pressure on women to morph their bodies into particular shapes.

The second, and more profound question to deal with was in relation to my own beliefs.  I am a feminist in that I believe people should be treated equally and have equal opportunities regardless of gender.  I also believe that we have a long, long way to go to reach that point, both in the West and in the rest of the world, and I am conscious of the fact that marriage is often used as a means of controlling and oppressing women.

On the other hand, I think that marriage can be an amazing thing.  It’s not for everyone, its roots aren’t brilliant (women being treated as property, being expected to ‘obey’, wearing white as a sign of virginity…the list goes on) and it often doesn’t work, but when it is a choice made by two people to make a commitment to each other, with all the work that entails, I personally think it’s rather lovely.  So for me there has never been any doubt that I would want to get married, when it was the right time, with the right person.

Once engaged, however, I started to question whether getting married was undermining my feminist beliefs.  Several women I love and admire do not wish to marry, as they believe it’s a patriarchal  leftover.  Were they right? Was I dealing a blow to the battle against the patriarchy?

After a couple of days reading and thinking, I came to the conclusion that marriage is what you choose to make of it. For us, it’s a partnership between equals, and I know that my fiancé, himself a feminist, will continue to respect me, my choices and opinions just as much as he does now.

I have also come to the sad realisation that despite my certainty that I am entering into an equal partnership, getting married will render me ‘less’ of a feminist in some people’s eyes, particularly as I have made decisions such as taking my fiancé’s surname (as a linguist I like the fact that we will be united by a signifier, and coming from a big family I like the idea of us and our kids all having the same name.)

Along with subjects as minor as hair removal (although this is symbolic of bigger issues) and as big as actively protesting outside government buildings for women’s rights, marriage feeds into the increasingly loud debate surrounding ‘how’ feminist you are and whether or not you’re “doing it right”.  This saddens me, as I believe that we are fundamentally all working for the same thing, in whatever way we can, and because women have always been forced into competing by societal pressures.

To start our lives as equal partners, my future husband and I are planning the wedding together, with guidance from our wedding-savvy parents.  The strange thing about modern heterosexual engagements is that brides are still expected to do most of the planning.  A fair few people have been surprised by the fact that we’re dividing the organisation between us, even prompting my fiancé to ask me if I actually wanted him to be involved (one of his many talents is spreadsheet mastery, so only a lunatic would exclude him from any planning-related activity).

Of course, it’ll be different for every couple, but leaving the groom out of the entire process seems a strange way to embark on a life together. I can’t decide if I’m amused or upset by the fact that you can buy books with such spectacularly patronising titles as “A Groom’s Guide: How Not to Ruin your Bride’s Special Day”, and “The Clueless Groom’s Guide: More Than Any Man Should Ever Know About Getting Married”.

The final thing that has been bugging me is the currently popular idea that marrying young is a massive mistake.  Since I changed my Facebook status to ‘Engaged’ (after telling everyone important in person or over the phone, don’t worry), my newsfeed has been cluttered with articles along the lines of “25 reasons not to get married before you’re 25” and “Why being single makes you happier”.

Without going into Facebook’s dodgy targeting, these articles have really been irritating me (I read them just to do a mental checklist of how they don’t apply to me and then shout “You’re wrong” at the screen; maybe Facebook actually knows me far too well).  Again, marriage and monogamy aren’t for everyone, and for many young people getting married probably would be quite a bad plan, but the lack of nuance in the media on the subject is risible.

If an alien species were to judge straight women’s relationships based purely on the media, they’d conclude that they spend their twenties merrily sleeping with as many people as humanly possible, before finding someone worthy of an extreme diet at a suitable point in their early thirties, because after that it just gets desperate.

It would be nice if everyone were left to decide on their own whether or not they want one or one hundred relationships, none at all, to marry young, to marry old, without the media bombarding them with messages about why they’re wrong.

The lesson I have learnt from my month and a bit of engagement is to listen to the people who know and care about you: they act as the perfect antidote to the toxicity of the media.  Or they’ll tell you you’re making a huge mistake, in which case you may want to listen. Or not.  As with marriage, the choice is, and always should be, yours.