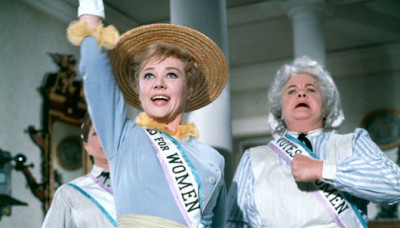 In 1908, a year after she joined the Women’s Social and Political Union (better known as the militant suffragettes) and became the Birmingham branch’s paid secretary, my great-great-great aunt Hilda Burkitt appeared before a court in Wolverhampton charged with preventing a police officer from entering a political meeting. While onlookers laughed, the judge told her to “Go back to Birmingham and don’t bother us again!”

[Spoiler alert: she didn’t listen to the second bit]

In September 1909 the Prime Minister Herbert Asquith visited Birmingham. As his train waited in the station, a group of suffragettes wreaked havoc. Leslie Hall and Mary Edwards were arrested for disorderly conduct and striking policemen, Laura Ainsworth ‘advanced on a barrow with a hatchet’ and threw stones, Mary Leigh and Charlotte Marsh climbed onto a nearby roof armed with axes, shouting “No surrender!” and “If you come up here it is at your peril!” whilst throwing the roof slates at the man sent up to get them. And Ellen Barnswell and Aunty Hilda forced their way through the crowd and barrier (suffragette attacks on Asquith when he was in public were common) onto the station platform and threw stones, smashing one of the train windows.

Hilda is reported by the press as having said she threw ‘because it was Mr Asquith’s train. I wish he had been in, all the same. My motive was political. I threw as a protest against women being kept out of Mr Asquith’s budget meeting.’

When the group of women arrived at Winson Green prison, the Prison Governor reported that they “started singing, shew’d defiance, threatened to assault Prison Officials, and said they would not go in cells, or undress until they were placed in the 1st Division”. (Inmates were placed in one of three groups related to the severity of their crime, as the suffragettes felt they were political prisoners, they believed they should have been placed in the ‘best’ one, where prisoners could wear their own clothes and didn’t have to do hard labour whilst they were placed in the same division as thieves and drunkards). Some of them started smashing cell windows. The Chaplain was sent to try and get them to behave. They wouldn’t behave and had to be handcuffed. They then began to hunger strike.

Three days after they entered the prison, a lawyer contacted the Home Office asking to be granted a visit to the Birmingham suffragettes, who claimed they were being illegally force-fed, and was refused a visit until a “Special Meeting” was called. The hospital doctor stated that he had tried to persuade them to eat and when they wouldn’t, he took Hilda away into a room, where she was tied to a chair by female warders and a metal pipe was put up her nose. The doctor claimed it caused so much retching it was removed and she ate voluntarily afterwards, she said they poured in milk and beef tea. After Hilda, Ellen Barnswell, the other half of their stone throwing duo, was led in, shown the equipment and told that Hilda had given in, and she agreed to eat. The others didn’t and were force fed until they gave in. Hilda took up the strike again and was on one occasion held down on her mattress and choked by the doctor until she opened her mouth. She was fed by force three times a day. In the yearly report of the prison it was decided that whilst the women “protested against being forcibly fed” (nasal tube feeding was illegal unless, tellingly, the prisoner was certified as ‘insane’) “some of these prisoners had, in consequence of breaches of prison rules, to be punished”.

All of the newspaper reports and records I have looked at reek of this attitude, like the onlookers in the courtroom, the male powerful laughed at the female powerless, and when they got violent, they tortured them and still continued to dismiss them. The women complained of sore throats, laryngitis and indigestion for weeks afterwards, but this doesn’t make it into any committee minutes and neither do any of the force feedings after the first (the others were reported to the press by the WSPU), as the Home Office refused to interfere with the Medical Inspector’s judgement and let them carry on.

When she was released from prison a month later, Hilda is reported as leaving with a ‘defiant shout of “votes for women!” and afterwards declared her determination to renew the campaign. She did not regret having thrown a missile at Mr Asquith’s train, she said, and believed violent tactics were justified by the refusal of the government to give heed to constitutional agitation.”

In short, fuck you. She didn’t give up either. Four years later she was arrested and placed under surveillance for trying to set fire to a football grandstand in Leeds, the next year she and a fellow suffragette called Florence Tunks burned down a pier in Yarmouth and an empty hotel in Felixstowe. Hilda was imprisoned for two years, force-fed again, and released after a month in the 1914 amnesty with the suffragette movement. After the first lot of legislation allowing some women to vote passed, she married, divorced, settled in Lancashire, and never mentioned her activities again.

Literally, like, nobody in my family knew. My grandfather, who would have met her, didn’t know until a historian got in contact with him researching the Felixstowe arson attack. We knew vaguely afterwards that she was the first suffragette to be force fed, but it wasn’t until I began to dig that I found out all the earlier chaos she’d caused.

And the more I dig, the more I’m blinded by the male gaze I’m forced to view her through. In one newspaper, the week’s suffragette activities across the country were reported in a column entitled “NEW OUTRAGES BY MAD WOMEN!” Hilda is often hysterical. There was great scandal caused by her telling the judge who sentenced her to two years to “Put on your black cap and condemn me to death!” (What she actually said wasn’t a hysterical-suffragette-friendly soundbite; she said that he might as well have sentenced her to death by sending her to prison and denying her the vote).

Now I am not telling Hilda’s story as a militant feminist call to arms. The women’s suffrage movement turned militant after decades of fruitless peaceful campaigning. I don’t think we should throw stones at Rupert Murdoch until women’s naked breasts are absent from The Sun or burn down buildings so George Osborne stops taxing tampons. Yet.

But I couldn’t help but feel uncomfortable as I read article after article detailing Hilda’s various brushes with the angry patriarchy. The most political activism I’ve done recently is signing a petition on change.org. I shared the 50:50 Parliament petition on Facebook. Sure, I’m doing stuff, and what more can I do?

I can do a lot more than Hilda can. I can vote. I can tell people to vote. I can write, and people can read me. I can speak out. OK I can speak out and maybe get an onslaught of male vitriol and rape threats on Twitter but I can still speak a lot louder than she can. I don’t have to assault the Prime Minister to get my voice heard in the press. Admittedly, it’s a press that analyses female politician’s clothes and won’t take tits off page 3 and ignores real violence against and oppression of women unless it wants to condemn Islam, but that just shows how much further feminism still has to go. I can maybe stop letting Internet misogynists pull me into a spiral of bashing my head against their ivory towers of male privilege, and start more literally throwing myself against the patriarchy’s walls, like my great-great-great aunt and all her WSPU sisters did. I’m not sure how, but I’ll start by maintaining eye contact next time the man at the corner shop looks uncomfortable when I rush in for emergency sanitary towels and I really will stop succumbing to Daily Mail clickbait.

P.S. I am of course also telling Hilda’s story because she didn’t.