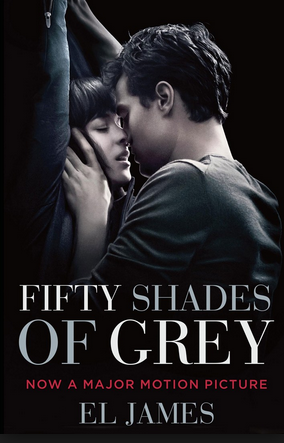 There has been (so) much discussion of the decision to omit the now infamous tampon scene* from the screen adaptation and, to be blunt; I just don’t really care about that. It would seem foolhardy to read anything into it but a bunch of producers totting up dollar signs and deciding they might make more money without it because… y’know… some people might think it’s ‘icky’. That said, if you’re into this kind of thing and feeling short-changed, I’ve just been informed that someone has recreated this using Sims and it is internet-available, so enjoy that.

The key features of this Mummicentric brand of pornography appear to be: a) contractually agreed submission b) a man of almost infinite wealth c) clandestine accessibility (the vast majority of Fifty Shades copies were thoughtfully sold in e-format enabling titillation sans blush for Mummies everywhere). So according to this terminology, Mummies crave what is effectively a Medieval marriage (see a) and b)) and sexual satisfaction, such as it is, that is either required to be or can only be facilitated if achieved on the sly. The implication being that those Mummies who are into this so-called ‘Mummy Porn’ are naughty, sexually repressed women just longing to be taken in hand; have their rubber gloves/Filofax (delete as appropriate) flung to the floor and be brought grudgingly to trembling realisation that all they’ve ever really wanted is a good seeing to from a rich, powerful man. Not only does this linguistic failing make some pretty worrying generalisations about women of a certain age but it precludes the idea that Mummies might be able to access such a rip-roaring good time in real life and are forced to live out their sexual desires as fantasy. Disempowering or quoi?

In the same vein, contemporary colloquial parlance also provides a helpful foil to that image of repressive mother, worn down by endless demands of husband and offspring, sitting at home fantasising about billionaires lashing her to a bedstead and removing sanitary products willy-nilly. That foil is the elusive figure of the ‘Yummy Mummy’ or, put somewhat less elegantly, the ‘M(um).I(‘d).L(ike to).F(uck).’ The lesser-feathered MILF. The attractive older woman somehow made more appealing as a sexual prospect by having popped out a couple of mini-persons. You’ll note here, that the language behind the acronym refers to the woman in question only as a mother (for that is the older woman’s defining characteristic) and as an object to be acted upon. Now, just to be absolutely clear, this term refers only to that mould of attractive older woman who waits in patient but sultry manner to be seduced by generic dashing young chap who, in stumbling upon her, cannot believe his luck.

Those older women, though, who have the audacity to take matters into their own hands, are not classified as MILFs. No, no, this is but a subcategory of what is known as the Cougar species. Defined as a North American puma (dangerous, predatory, powerful) and also, in helpfully precise (and offensive terms) by the Urban Dictionary as:

Thank you Urban Dictionary. Thank you for (re?)defining the older woman from the perspective of shallow, misogynist, straight young men – the balance was getting dangerously skewed there for a minute. I’m not even sure what parts of that mean.

This preoccupation with female sexuality has always been inextricable from motherhood. In the good old bad days, wifely fidelity was crucial to the preservation of bloodline, heritage, wealth and titles. To cuckold was not just a personal betrayal but also a route to wholesale disenfranchisement. Any number of little bastards running around somewhat muddies the waters with regards to inheritance, which in a feudal system is of paramount importance. Why do you think Othello becomes so wholly irrational (this is admittedly an understatement) in the face of Desdemona’s supposed infidelity? Why does Lear curse his evil daughters in such gruesome genital terms except in seeking to undo the power he has divested upon them?

That such linguistic patterns continue to insinuate themselves into everyday conversation – as well as media discussion of fairly vanilla erotica – illustrates the continued prevalence of (literally!) medieval attitudes towards women and sex and especially the mature woman and sex.

* In this scene, billionaire removes tampon from young woman’s vagina and has sex with her anyway, in spite of her period (“Lawks! Not her period!” I hear you cry…)