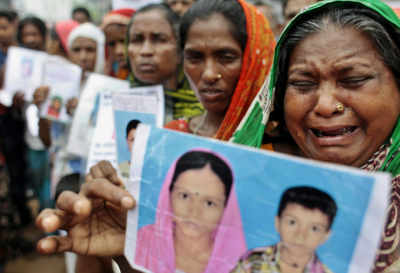 Fashion Revolution Day (#FashRev) on Friday 24th April 2015, marks two years since this happened and is also encouraging us all to use social media to ask big fashion brands #whomademyclothes and promoting ethical and sustainable fashion events as alternatives.

Rana Plaza had been deemed completely unsafe to work in with large visible cracks in the walls and workers were not evacuated. There are claims the doors to the building were locked, the fire escapes blocked, and that workers were told they wouldn’t have a job to come back to if they left the building. The one thing that is clear is that everybody felt they could not afford to not be working and the main reason these people died was because of the Western world’s voracious appetite for profit for a few individuals and our turning a blind-eye in exchange for cheap clothes.

I love fashion and always have, its been said so many times that it feels trite or clichéd but it really is a means of expressing individuality, it makes us feel good about ourselves, feel like we’re part of a trend, setting a trend even or viewing a work of art. As a feminist I’m not ashamed to say this, there are certainly ways the fashion industry, like all patriarchal industries has tried to oppress or discriminate against women but as for feminism and fashion, taken outside the context of industry, the two are not mutually exclusive. There are lots of people who disagree but, before you do, please read Hadley Freeman’s infinitely more eloquent explanation as to why these people are wrong.

Women are undoubtedly the biggest consumers of fashion and also make up the vast majority of the estimated 40 million garment workers across the world. It’s one of the few industries that revolves around women (albeit still with not enough of them in top management roles, but that’s a rant for another day). Therefore putting a stop to the exploitation of millions of other women with something as simple as our every day shopping habits should rank quite highly on our agenda.

We’ve seen stories of exploitation like Rana Plaza crop up from time to time in the news when a below-minimum wage scandal manages to create headlines because it’s in this country or when everyone wants to take down a smugly self-satisfied politician wearing that well known mark of true feminism: the printed t-shirt. But for the most part, the facts about where our clothes are made remain out of sight, out of mind.

This week I was lucky enough to watch a preview screening of Andrew Morgan’s upcoming documentary, True Cost. He offers an eye-opening view of the whole industry and how it grew to be like this, not just symptomatic one-off events. From the major corporations controlling the growth of almost all cotton, to the garment workers killed by riot police last year in Cambodia whilst protesting for a living wage of $160 a month, all the way up to the marketing departments of the big brands. These have been working for the last 20 years to change our whole pattern of buying, and convince us that an item of clothing that has been researched, designed, grown from a cotton plantation, dyed, sewn by a human machinist (no car-making robots for the fashion industry!) and then shipped across the world, can still be as disposable as our daily newspapers.

Like most people working in ethical or fair trade fashion, I’m not an advocate of using only UK manufacturing or forcing big retailers to pull out of overseas manufacturing. This is unrealistic and I do believe that a healthy UK economy and appetite for fashion can be used to help improve conditions in developing countries. It’s also true that their cost of living is lower than in the UK and there are worse alternatives for them than working in a garment factory, if they are paid a living wage and given the correct working conditions. Unfortunately in the constant race to lower prices and quicker deliveries these basic human rights are too often forgotten.

From a customer’s point of view there are more and more great alternatives to the high street. With the whole internet at our fingertips the proliferation of ethical brands has never been so easy to find, but it’s also unrealistic to say simply don’t shop in any major high street shops.

Fashion Revolution Day is simply asking brands to make themselves more transparent and consumers to make themselves more aware of where their clothes came from because, and this is the big, monogrammed, red-soled, shiny silver lining in all of this: WE have the power to make retailers change. The customer is always right and that means if we question more where our clothes come from then big retailers will be forced to change.

So how can we get involved in Fashion Revolution Day:

6 thoughts on “The Importance of Knowing #Whomademyclothes”