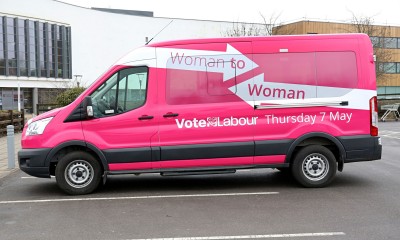 In the weeks leading up to election day, during the peacock dance that is the pre-election period, it feels as though politicians are forever attempting to make their party appealing to women, highlighting how in touch they are with what they tend to call ‘women’s issues’. As somebody female who has always been highly political, I am infuriated by the way in which this is framed (and that’s long before you even attempt to deconstruct what being a ‘woman’ actually is) – not to mention the fact that ‘being in touch with women’s issues’ makes you sound way more like a creepy gynaecologist than a potential prime minister.

Obviously this whole ‘women’s issues’ thing can be read as yet another ploy to garner more votes – particularly as research has shown that over 9 million women failed to vote in the last election, compared to 8 million men. (Clearly, if Cameron or Miliband saw a flicker of a chance to reap a million potential voters, both of them would ride that pink bus shirtless from Land’s End to John O’Groats, much to the delight of their (alleged) teenage fanbase…)

From Woman’s Hour to Question Time, it seems that women favour different issues, according to pundits and politicians alike: which, as far as I can tell, seems to be a combination of softer voices, come-hither eyes, casual poses, and childcare. Yet, whilst I certainly register tendencies to favour policies in relation to particular socio-economic backgrounds, employment status and age groups, I see very little disparity between the areas of interest along gender lines. I wanted to investigate, and see whether there really are clear indications that ‘women’s interests’ are indeed substantially different at all: does gender really influence voting behaviour?

A recently commissioned poll for the BBC found pretty negligible differences between the areas of concern for women compared to all adults– the NHS was only slightly higher for women (59 to 55%) as was the cost of caring for a family (30 to 25%) whilst immigration and housing were pretty similar. The survey found that a higher proportion of women in comparison to men ‘are worried about the future’ (52% vs. 43%), and yet what that tells you in relation to policy preference is not exactly clear – particularly when there is a discrepancy between engagement with the economy between men and women ( where men (31%) are significantly more concerned about the economy than women (21%) according to the poll).

The way the ‘future’ is constructed is not elucidated, of course: spaceships and long waiting lists? Of course, ‘the economy’ IS also the NHS, and housing, and immigration, so to distill them erodes the principle understanding of how the market works. Similarly, the larger proportion of female respondents who were ‘concerned’ about the NHS is likely to reflect the fact that a higher number of public sector workers are women, just as a higher number of primary caregivers and guardians happen to also be female. In this sense, the survey reflects instances of power, economy and employment rather than any kind of innate gender preference.

Evidence from numerous recent studies here and in the US suggests that female political participation increases significantly when there are more women in parliament, but it can be argued that the issue of representation is just as important a tool of mobilisation as it is for BME, disabled or LGBT voters.

At the end of the day, I could be cynical and call it a race to increase turnout. Which it is. But I do think some politicians believe there is a difference to be catered to. Harriet Harman has done a lot to advance the cause of equal pay, but her comment that she would win over female voters in this year’s election by bringing “politics to the school gate and the shopping centre” really irked me. It reflects an assumption that the role of the mother, or Kerry Katona’s Iceland trolley-hogger, is basically where women’s political awareness begins and ends. Labour’s ‘women’s manifesto’ – pink, of course, like that gleaming bus (where does it go? What does it do? Is it full of cake and tea like a WI convention or Emmeline Pankhurst’s crowbars?) – was launched to as much aplomb as criticism, with a clear focus on families and sexual violence which, to my mind, are not EXCLUSIVELY women’s issues (call me crazy). Segregating them in this way merely serves to reinforce the idea that the private sphere is a female space, and violence against women only adversely affects women (rest easy, the patriarchy). Similarly, the Conservatives seem to highlight childcare provision as evidence that they are taking women into account. I have a child, Dave, but my priorities don’t stop with the four o’clock pick-up.

I am currently writing in my professional life about Emma Goldman – who fought for birth control, free speech, and pacifism against capitalism and state violence. Notably, however, her anarchism hinted at something which might be more deeply problematic when it comes to the system of democracy in which this politics of capture plays out: she wrote that the woman “can give suffrage or the ballot no new quality, nor can she receive anything from it that will enhance her own quality”. For her, liberation meant recognising that the current social order made participation – particularly of those considered to have less value, less evidently commodifiable virtue – useless, until the system itself could be transformed to recognise anything that didn’t conform to its own limits of the property-owning, white male.

I’m not going to do a Russell Brand and call for no voting until there is an awareness that not talking about ‘women’s issues’ (if these are narrowly conceived as related only to spawn or the weekly Asda shop) is NOT the reason that people are not voting, however I do think that all the parties are missing something here. I would argue a lot of people are not being catered to, and greater diversity is always preferable: but this also means an intersectional approach to all policy and research, as there are always multiple factors influencing voting behavior and the eventual manifestation of policy in every area of concern. This should be self-evident, and yet the narrative of what ‘women’ want and need from their politicians is still doggedly singular.

Until this is acknowledged, Emmeline Pankhurst’s observation that, “How different thereasoning is that men adopt when they are discussing the cases of men and those of women” still holds its stubborn and ugly course.

2 thoughts on “What Exactly are ‘Women’s Issues’ in Politics?”