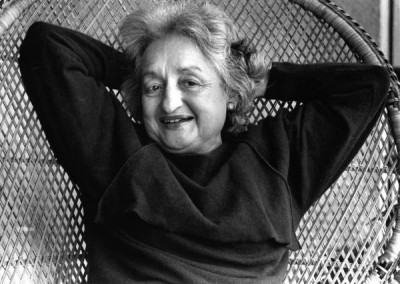 When I was going through my teenage phase of reading the great feminist classics, I always put off starting The Feminine Mystique — there was something about the title that raised my hackles. It sounded earth-motherish, as if it was going to talk about the moon and goddesses and the deep, mysterious connection to the natural world that results from having a period once a month (but not, say from blowing your nose or having a shit). I feared that it would be woolly, and not at all like the angry-eyed, clear-sighted polemics I had previously enjoyed.

I was totally wrong. If one is allowed to have favourites in the world of classic feminist tracts, then I have to admit that The Feminine Mystique is mine. Passionate, readable and supplying a hefty dose of the rubbernecker’s guilty schadenfreude thrill – ‘glad that’s not me’ – I can lose myself in its pastel-toned, suburban world over and over again. Friedan describes a place where high school girls are ‘mad about’ collecting silver tableware in anticipation of their inevitable marriage (husband TBC), where classes in domestic tasks and ‘anthropology’ lessons about the natural differences between the sexes are compulsory for female college students and where women suddenly snap at the age of 45 and run naked and screaming down well-to-do residential streets.

The world of the 1940s and 1950s has achieved a mythical status with regard to women and the home. It is seen a golden age of domesticity, although a knowing, retro sensibility now allows us to play with the idea of the Stepford wife, as if irony was all that was needed to render it harmless. It’s kitschy, it’s fun, we can bake cupcakes and not take it seriously. We positively enjoy Mad Men and its delicious, breath-taking sexism. The perfect 50s housewife is a joke, but a strangely enticing one.

Friedan was, for obvious reasons, unhampered by this fog of nostalgia, and instead stared in horror at her society; she saw it moving away from what had seemed a promising expansion of women’s equality at the turn of the century, and unstoppably towards a world of flowery pinnies, endless childrearing and living vicariously through your husband and kids. She saw a generation of intelligent, ambitious, able women thrust back into the kitchen and told that they were ‘unfeminine’ for wanting anything more. She saw, in short, a backlash. And she knew where to look to find out why.

Friedan turned to the world of the media — frequently focusing on women’s magazines — to trace the causes and effects of this new weapon of oppression, the eponymous ‘feminine mystique’. To find the answer, it seems, is simple: follow the money.

‘Why is it never said that the really crucial function, the really important role that women serve as housewives is to buy more things for the house?’ she asks at the start of Chapter Nine of her unexpectedly biting book. Friedan made the link that all of this misery, perfectionism and massive social upheaval boiled down, ultimately, to the profits that could be made from persuading a housewife to buy two sorts of detergent instead of one. The idea that the majority of women should be entirely economically unproductive was a new one — working class women had always worked, and the preceding forty years had seen a surge in middle class women training for professions. But now they were required to put all that aside and instead become the spenders of the household budget, not the producers. A woman’s mental health, the trajectory of her life, the education she could expect to receive, her role in society, all of this was reshaped by a business model which insisted that someone, anyone, buy products as fast as they could be created.

The 50s may have been the age of the home appliance, but the proliferation of labour-saving devices did nothing to cut down the hours of housework. There was always another task ready to take its place or the standards expected were jacked ever higher — one woman whose washing machine broke down is quoted as saying that, after eight days without clean sheets: ‘Everyone complained. We all felt dirty. I felt guilty.’ Wifework was elevated to the highest possible calling for women, simply so that they would continue to consume at greater and greater rates.

This may not come as a surprise to the modern reader, but at the time it was revolutionary, and still bears considering today. After all, The Media is not a shadowy political group that meets in secret once a month and discusses the best way to oppress women this season, simply to gratify its own nefarious, patriarchal ends. Instead, it is that insidious creep of advertising revenues and sales of products which keeps us all on our toes — an ad for a new anti-ageing cream, for instance, will go down better with a reader who’s already been primed by a story about women ‘leaving it too late’ to have babies and six pages of dewy-skinned teenage models, and will be placed accordingly. That the side effect is a generalised loss of self-esteem, an increase in anxiety and a fear of failure that spills outside of the face cream market and into the readers’ actual lives is just collateral damage. It’s not what the magazines expressly want to happen, it just…happens. We know this. And yet we sometimes forget just how pernicious and powerful the effects can be.

Friedan, of course, does not blame the media entirely for the position of women in the 50s. There was, as always, a hefty dose of good old-fashioned misogyny in the desire to restrict the expansion of equal rights for women. The Feminine Mystique was seized on enthusiastically by all sorts of people — educators, employers, health professionals — many of whom did not have a stake in the revenues of floor wax companies and cosmetics producers.

It is Friedan’s words about the power wielded by the media that seem the most frighteningly relevant to our current society. (We are fortunate that now, when a senior politician jokes that women go to university ‘because they have got to find men to marry’, he is ‘reprimanded’, even if he stops short of actually apologising of his own accord.)

Friedan originally intended to write up her research as an article, but could not find a magazine willing to take it on. That’s not surprising; the book is an informed and relentless attack on the media and is credited with being the shot that started the war of the Second Wave. What perhaps remains so shocking is that, even though the waves of feminism are supposed to have turned a couple of times since then, what was said by her then is still assiduously denied by some fully paid-up members of capitalist society. It’s worth bearing in mind that feminism as a movement isn’t always as linear as we’d like to think.

6 thoughts on “Follow The Money to Find the Misogyny: Why Betty Friedan Was Right”