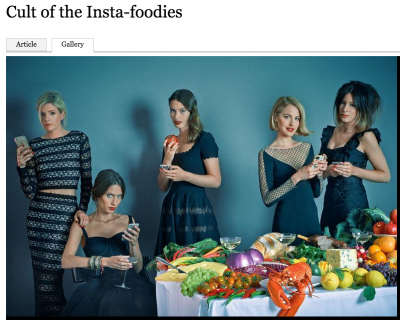 A couple of weeks ago, a few girlfriends and I were musing over where to have pre-cinema dinner. Never being one to miss the opportunity for chips, and being on a reasonably tight budget, I suggested a cheeky Nandos. I wasn’t expecting an overly-enthusiastic response, but I was a little perturbed (grammatically and morally) when I was told one of our group was ‘eating really clean’ at the moment, so we had to go elsewhere.

In the end, after much faffing around, we went to a well-known Italian chain and had a pretty decent meal (despite the absence of chips – harrumph). My clean eating friend, after much scouring of the menu, ordered a salad and a glass of water.

Now, this isn’t a rant about someone’s choice to eat greens – diet is, to a certain extent, a personal choice (albeit sometimes determined by finance, health and other factors). But nevertheless the term ‘clean eating’ (a phrase that’s been much jumped on by the media in recent weeks)  leaves a sour taste in my mouth. Because if the food I am consuming is not ‘clean’, it is therefore ‘dirty’, ‘filthy’, or at the very least, slightly grubby.

It’s not just the implication that ‘non-clean’ food is ‘dirty’ which grates, but the sense of shame and guilt that this narrative bestows upon those of us who like the odd bit of cheese/chocolate/whatever might be your chosen vegan alternative. The term ‘clean eating’ gives off a judgmental air, suggesting that every ‘non-clean’ food isn’t quite good enough. As if people, and women particularly, don’t have enough to contend with without feeling guilty for consuming a post-work bag of mini-cheddars.

If you’ve successfully managed to avoid the hype, you might be asking yourslef what in the name of arse ‘clean eating’ actually means. The website cleaneating.com defines it as ‘not a diet…(but) a happy and healthy lifestyle’. Buzzfeed, having recently published its second ‘clean eating challenge’, summarises it as ‘low-carb. and gluten-free with an emphasis on lean protein’. The Mirror declares it as a way to ‘shift those stubborn extra pounds…in time for summer’. In fact, a cursory search reveals no end of definitions – ‘clean eating’ has entered the lexicon and become A Thing, without having been clearly defined. It is becoming a blanket term for unrealistic dietary expectations that might possibly but probably won’t cure your IBS. Many clean eating regimes are so restrictive that proponents are consuming as little as they would be on any other weight loss diet yet, we are reminded constantly, this is about “health”. For proof that clean eating has become more than a lifestyle fetish, you need only look as far as the Times a couple of weekends ago, featuring as it did Deliciously Ella and other clean eating proponents as part of a glamorous photoshoot. You can try arguing that clean eating isn’t about adhering to rigid female beauty standards, but who would believe you while looking at those pictures? As with many diets geared towards women, it’s about restriction.

It’s no secret that home cooking works out generally cheaper than buying ready-made meals and budget supermarkets have made access to decent fruit and veg readily available – yes, I know I’m supposed to be shopping locally and organically, and one day I will, but in the meantime, supermarkets will have to do. That being said, I was surprised that the ‘clean-eating challenge’ would require me to spend £230 per fortnight on this plan in order to feed just myself. My young teacher’s salary just about covers rent and living costs but comes nowhere near close to being able to afford this! This requirement for adherents to spend extortionate amounts lest they eat ‘unclean’ food smacks of classism and snobbery. The ones that can afford are the ‘clean’. Those who cannot are condemned and ‘impure’.

A quick search of ‘clean eating’ meal plans reveals the average calorific amount to be 1,300-1,600 per day. The NHS recommends that women consume around 2,000 calories per day, although this depends to a certain extent on age, metabolism and physical activity. For a movement/trend/fad claiming to be (amongst other things) a ‘lifestyle’, recommending so few calories cannot be sustainable, let alone physically or mentally healthy. ‘Clean eating’ is nothing new – it is calorie counting repackaged.

Established diet plans use religious tropes as part of their jargon. Slimming World, for instance, refers to limited foods as ‘syns’. The mere association of a word so similar to ‘sin’ with certain foods links them to the need for guilt and repentance. ‘Clean eating’ is no different. Buzzfeed empathises with the weak in the most patronising of tones – ‘we understand some of you might cheat,’ it chides before allowing followers the odd glass of white wine. The Mirror preaches stricter lessons, telling readers to ‘avoid dirty, processed foods’, and cleaneating.com, in its Decalogue-like list to post on a fridge door (I am not joking here) instructs us to ‘know thy enemies’. These include additives and foods high in sugar. ‘Clean eating’ is creating a quasi-religious narrative based on exalting the pure and shaming the non-believers.

I fail to see anything inherently wrong with eating a decent amount of healthy food, despite my need for chips as part of Friday lunch (they just get me through the last few hours…) However, a food trend which dichotomises the good and the bad, requires prep. time and money that a lot of people haven’t got, and lacks clear demarcation as to what it actually is all about, should be taken with a pinch of salt. Or not. Salt is unclean after all.