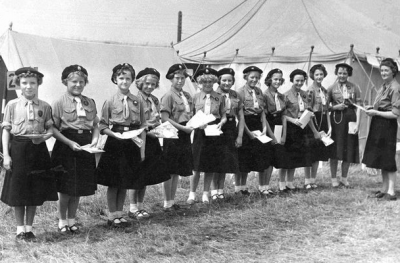 “You have like big hair and a tiny face. It looks nice… On some people”

“I saw you with your boyfriend. He has a massive beard and no hair and he is like good looking for a 50 year old but you could do better. You could definitely get like a cute vet or something”

“If you don’t get paid, are you like really really poor?”

Where, you may well ask, could this eclectic set of quotes have come from? One of those ‘Guess Who Said it, a Psychopath or a Celebrity’ quizzes? Or perhaps it’s an excerpt from the unpublished script of a Mean Girls 3 film?

Alas, no, it’s a short collection of the musings of the group of 10-14 yr old Girl Guides I lead every Tuesday night.

I think I speak for my fellow leaders when I say that we do, on occasion, long for the days when more ‘traditional’ guiding was the norm: marching, knitting and making campfires seem like an idyllic paradise when you have spent an hour trying to stop teenage girls shouting such classic chat up lines as “can I take your picture so I can show Santa what I want for Christmas?” to the increasingly mortified male instructor who is attempting to teach them how to shoot a rifle.

However, what began for me age 10 as something I did because it provided a convenient way for me to meet my friends once a week and not do a lot, has now become something I feel honour bound to continue with because it is probably the most important thing I do all week. Although, as my long suffering (and apparently middle-aged) boyfriend will attest, I often do not feel like that at 11pm on a Monday night when I am madly googling recipes for ‘slime’.

The girls in my group are from an affluent part of London and have parents who are very supportive of them which is great, it also means that Guides is not, as I remember it being, something the girls are embarrassed of doing. The majority of them are very confident but they are also embroiled in the drama which comes along with having a modicum of a social life in high school. Not being overly long out of my teens I can still vividly remember the hurt/embarrassment/angst that is being a girl in high school and, like most people, there are so many things I wish I could say to my younger self. Therefore I endeavour to say them to my guides.

We do some traditional ‘Guiding’ activities (I am still trying to remove the lard stains from my jeans after our attempt at making bird feeders) but as a group of leaders we also have sessions which I like to half-jokingly think of as ‘feminist indoctrination.’ These involve trying to teach the girls what society doesn’t – that they are valued and important and not defined by their physical attributes or their ability to attract a boyfriend/girlfriend. Having attended an all-girls grammar school I feel the importance of having time in an all-lady environment cannot be underestimated. A colleague asked me recently if I would not rather do Scouts ‘because there is so much less drama with boys.’ This attitude fills me with an almost uncontrollable urge to do something unspeakable to said colleague with the nearest piece of feminist literature I can get my hands on. The ‘drama’ they were referring to which we are always told accompanies teenage girls is, most definitely, a symptom of their attempts to process all the patriarchal bullshit which is heaped upon them.

I realise that it’s boring listening to millennials whine about how old they feel and I know I was only a teenager 3 years ago, but the digital minefield that the girls in my unit have to tread feels like another world. I am by no means saying that online bullying did not exist when I was in school, I definitely saw and possibly penned more than a few cruel bebo posts. But the level of digital penetration into their lives is so much deeper than I can ever remember it being.

Recently we had a ‘Selfie night’ where all we did was take selfies, in order to try and stem the flow of constant selfie-taking in meetings. When I was 12, I thought body glitter, crimped hair and eyeliner was an irresistibly alluring combination and I loved pretending to be Pocahontas. These girls spend their time on Instagram volunteering to have boys ‘vote’ them as most or least attractive. I think the difference is that when I was at school there was no explicit requirement to put yourself out there and ask for your peers to validate your appearance. Yes there were some really mean comments thrown around about my abundance of leg hair and lack of anything remotely resembling breasts, but there was no expectation for you to actually ask your equally spotty, sweaty and awkward male counterparts to tell you where you ranked in their mental wank bank hierarchy. Whereas now, these girls are expected to be willing to ask others to essentially put them down, or be discounted from the social hierarchy which, while appealing in retrospect for many of us, in reality would make for a pretty miserable 7 years.

So that is why I don’t mind spending time discussing why my eyebrows ARE only eyebrow-y at one end (over-zealous plucking in my teenage years?) and I don’t even mind the sore throat and exhaustion that comes with spending an hour and half trying to make teenagers listen to you. Because I believe that helping young women to survive the metric tonne of sexist crap that is piled at their door before they even have their first period is worth a few hours a week of my time. And while we may not have crushed the patriarchy yet, I think this is a bloody good place to start.

2 thoughts on “Confessions of a Girl Guide Leader”