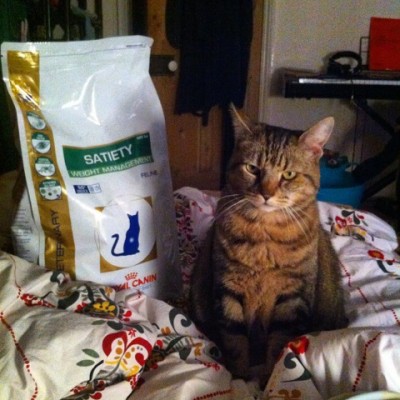 In December last year, my boyfriend and I adopted a cat together. It was apparently the cue the world had been waiting for, because immediately the, ‘Oooh, is it a practice baby?’ comments started pouring in. No one was safe: not my family, not my friends, not my colleagues. Even one of my old teachers cracked the ‘First a cat, then a baby’ joke.

My boyfriend, it goes without saying, has been on the receiving end of precisely none of these remarks.

I’ll be the first to admit that having your love of cats equated with broodiness is not the world’s most pressing feminist concern. For one thing, it’s just patently ridiculous. My cat is nothing like a baby: she’s 10 years old, has retractable claws, and eats a special prescription diet food for obese cats called ‘Satiety’ that we buy in bulk from the vets’. I’m 99% sure those traits wouldn’t be normal in a child.

But the annoying thing isn’t that people think my cat’s a practice child, but that they think it’s my practice child – as in very demonstrably and individually mine, and not at all my boyfriend’s. Why am I assumed to be the one that’s hankering after a mini-me? Probably because it’s been drilled into us since birth that all women want to have children, and that this urge is more powerful and universal than it is in men (even though research indicates that childless men and women show similar levels of desire for parenthood).

Don’t believe me? Just take a look at the ‘crazy cat lady’ stereotype. The crazy cat lady of old was an ugly, ageing spinster left on the shelf with only her furry friends for company; nowadays, she’s a career woman with no time for childbearing, but plenty of time to tweet photos of her favourite feline. Either way, she’s childless. The cats, it’s implied, are there to fill the gaping hole in her life where babies should be, functioning as either practice or replacement children depending on the woman’s age.

Of course there’s no equivalent phrase for men. What would that even be anyway? ‘Deranged dog dudes’? ‘Mad mole men’? I’ll take suggestions via Twitter.

The idea underlying all of this – that children are essentially a woman’s domain – is an injustice to both genders, from the women who remain childless by choice or suffer the stigma of never becoming a mother, to the men who yearn for fatherhood or want to play a greater role in their children’s upbringing. It’s attitudes like this that prevent men from playing a greater role in childcare or entering the early years education sector.

We can’t just cross our fingers and hope that the next generation will somehow magically overcomes years of internalised gender socialisation on its own. We need to change our behaviour. And that starts with not automatically assuming that all women with cats are simply trying to silence the lonely ache of an empty uterus.

To misquote Freud: “Sometimes a cat is just a cat.”

6 thoughts on “My Boyfriend and I Adopted A Cat, Not A “Surrogate Child””