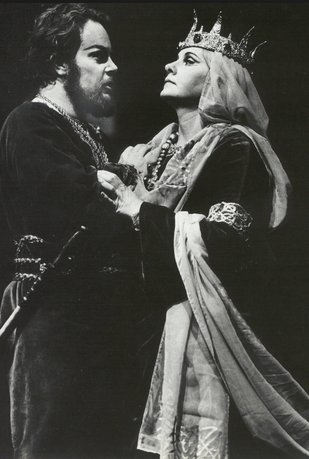 Love him or hate him, you will have spent some of your life studying the bard with the pointy beard. I myself have always been a fan, ever since the days I pretended to be Lady Macbeth in Year 9, posing dramatically and standing with my feet wide apart (and giggling when I had to say the ‘unsex me here’ bit). In fact, I went on to become an English teacher, meaning I have no doubt bored to tears hundreds of poor children, enthusing about the brilliant insight he has into the human psyche, his beautiful and eloquent language, or if all else fails, pointing out that ‘love stick’ and ‘my naked weapon is out’ in Romeo and Juliet is, well, you know, about penises. Which is sometimes all you can do on a Friday afternoon with a bottom set. The thing is though, I’m right. I think the reason I first adored him was the character of Lady Macbeth. She was brilliant. Bossing her husband about, driven by a desire for power and greatness, then driven mad by her conscience at what she’d done. In fact, during the scene where the king is killed, Macbeth mucks it up by bringing the daggers back out, so she has to go in and cover them in blood to make it look like they did it. She tells her husband off for being such a wuss. Amazing character. And there are others. Cordelia in King Lear refuses to bow to the sycophantic ramblings of her sisters in order to ‘prove’ how much she loves her Dad. When he banishes her, she gets a French army to come and rescue him. And she isn’t just ‘good,’ she’s stubborn, wilful and proud. In short, in a time when women were not even allowed on the stage, to vote, or own property, they were written as complex, nuanced and independent characters, encompassing all of the scope and breadth of their male counterparts.

To cite a few popular examples (and popular makes sense, because the plebs were watching Shakespeare), Gone Girl promised so much, really explored the differences in gender and expectations in terms of relationships, and then ruined it (spoiler alert) by turning the female character into just another bunny boiler mentalist that actually had you feeling a bit sorry for the creep that cheated on her. Twilight and, by extrapolation, Fifty Shades, was an abhorrence in terms of female characters. Whiny women with no ambition beyond getting married to some psychotic narcissist that abused them. Nice. Of course there are hundreds of less popular books with amazing female characters but the fact is that they are in a huge minority. Yes, Katniss Everdeen, but I don’t like that she had to subscribe to the idea that she had to be ‘manly’ and not have feelings in order to be a hero. Lots of male heroes get upset about stuff and that doesn’t seem to impinge on their heroicness (heroicity?). My niece said she wanted to be a boy, because they got to do far more interesting stuff, and I don’t blame her. Everywhere we look, male characters are off having wonderful adventures while women, well, aren’t. On the opposite side, where are the books about men falling in love and having babies? It’s not like we’re doing it independently. But someone decided this was the stuff of ‘women’s fiction’ (even Juliet had more on her plate than just a boy she fancied) and therefore doesn’t cross over.

On both sides, there will always be ‘fluff.’ The literary equivalent of chick flicks and action films, that you can pleasantly switch your brain off to while the main character kills people/solves mysteries/gets the girl or finds her dream job/goes on a diet/gets the boy. While I don’t read them myself, I understand their role, but these things don’t exist in a vacuum. These models of simple storytelling balloon out into the wider literary world and create unhelpful assumptions about gender and the actions and events associated with it. And even then, they’re often covering far more challenging and complex problems than finding a guy, but the cover and the marketing so often sell it that way.

Of course the ultimate irony here is that it’s women that are reading all the books. Almost 50% of women class themselves as ‘avid readers,’ with only 26% joining this list from the other side of the chromosome. You would think that women would control the industry they have such an enormous influence on, not be continually limited by it. But then again, that hasn’t worked in Hollywood film, either (12% of on-screen protagonists in US films in the 2014 were female).

And what about the big literary prizes? Seeing as women dominate the reading world so much, you would think it would extend to other areas. Again, this is not reflected. The list of prizes, from Costa to Booker, are dominated by male writers, with up to 80% of the longlists comprised of male writers. And interestingly enough, a lot of the female writers that are listed are writing about men. For some reason, they are still given far much more narrative nuance and scope than those of us with a uterus.

So what’s the solution? Personally, I think some of the fault can be laid at the doors of the publishing industry. If they insist on branding books ‘for women’ or by women in such a cutesy fluffy way, even when the content is serious, then it will be impossible for female authors, or for writers with female characters, to move outside the sphere of commercial fiction and into the more serious and critically-acclaimed areas that are currently dominated by males.  The argument from publishers is that they only print stuff that will sell. So the question is, are there actually fantastic books out there that aren’t being printed because they aren’t considered popular, or are they being written at all? It’s tricky to decide whether the fault lies with the writer, or the publisher. If J.K. Rowling had pitched ‘Harriette Potter,’ would the publishing world be as keen to give her a voice? From children’s books through to adult fiction, we are severely lacking interesting, engaging, nuanced characters that would inspire young people (not just girls) to move outside the roles prescribed to them by society and allow that gender does not have to define your personality or your actions.

Will would be disappointed.