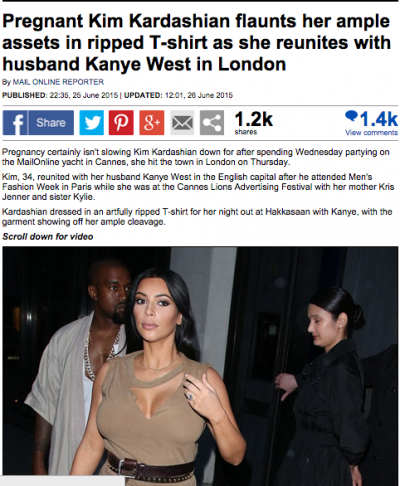 Three weeks ago I had my second miscarriage. The past six months have hollowed out my insides (literally and figuratively) and left me with a disturbing propensity to burst into tears at random moments. My life is on hold while I try to do something I thought would be easy. The fact it isn’t easy has come as a terrible shock.

Underlying that shock is an overwhelming sense of loneliness – and shame. I know I did nothing wrong. But I still feel like I’ve failed. And the Mail Online really isn’t helping.

We all know the Daily Mail likes women to have babies. It’s even kind enough to regularly publish cautionary tales from wizened old crones in their forties who deeply regret their decision to pursue a career whilst their ovaries slowly shrivelled inside them (the assumption is always that this is purely a woman’s choice. If we’re not all pushing small people out of our private parts, it’s simply selfishness.) But that is nothing compared to their relentless obsession with celebrity pregnancy.

They’re not alone in this, of course. Just take a look at all the shelf of celebrity magazines in your local newsagents. Who doesn’t love a picture of a smiling, beautiful young woman with a perfectly proportioned bump? A high profile pregnancy is the gift that keeps on giving: the speculation, the confirmation, the progress reports, the baby shower, the birth, the sponsored photo-shoot, the first push around Hyde Park in a ridiculously expensive buggy, and so on and so on. It’s a wonderful, happy thing and, let’s face it, there’s not a lot of good news out there at the moment.

But it is also a perfect opportunity to put women neatly back in the box where they belong. As soon as a female celebrity becomes pregnant, any and all her previous achievements are wiped off the slate. They are no longer a singer, actress or even a ‘reality star’, they are a mum-to-be.  Whatever you think of Kim Kardashian you can’t deny she has an impressive CV, but now she’s expecting her second child you won’t see her name without the qualifier ‘pregnant’ in front of it.

This fresh start view is all-inclusive. It doesn’t matter what you’ve done before: however much the press may have ridiculed you for your questionable fashion choices or short-lived relationships, once you’re up the duff it’s all complimentary fluff pieces about maternity fashion and Instagram pictures of your stomach.

It’s a reassuring reminder that every woman, no matter how many records she sells, nightclubs she falls out of or millions she makes, will find meaning and contentment at the bottom of a nappy bag.

What does this mean for the women like me? Those of us who struggle to get, or stay, pregnant? Where do we fit into this picture?

Official figures estimate that one in four pregnancies ends in miscarriage, about 250,000 each year. That’s a lot of loss. It’s also completely natural. A very kind doctor told me (as I sobbed at his desk) that miscarriage is simply nature’s way of dealing with an embryo or fetus that just isn’t viable. It’s another amazing thing that the female body does to ensure the survival of the species.

I believe that sense of shame and failure I have is at least partly influenced by the media’s fascination and preoccupation with women as baby-making machines. I’m not as good as those starlets with the smoothly stretched stomachs. It doesn’t matter if I’m smart, successful, kind and loved. I have failed at what a woman is supposed to do.

I know it’s not rational, but it’s a powerful paradigm. We need to talk about miscarriage so people like me can get on with mourning our loss without beating ourselves up, too.

For information and support, visit http://www.miscarriageassociation.org.uk