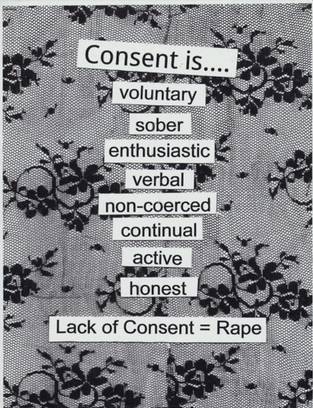 As of last term, primary schools in the UK will be teaching year six pupils about consent. I think it sounds like a brilliant idea, but some adults are squeamish about it. One journalist of a particular newspaper (which I won’t bother to name because by the next sentence you will be able to guess) went beyond squeamishness and compared this change to child abuse. She thinks that eleven-year-olds should be allowed to have some of their youth left over for playing stuck in the mud, decorating fairy cakes and not worrying about all that nasty sex stuff.

Which does sound reasonable enough: if they really are such oblivious youngsters we should protect them from this conversation, which will inevitably have to address difficult, even brutal topics.

But here’s the thing: I can still remember what my peers and I were like at the age of eleven. And pure-minded little angels we were not.

We whispered, gossiped and nattered away about sex all the time. And I do mean all the time- at one point sensitivity to innuendo had reached such dizzying heights that even the word “it” (IT! Like you’re doing IT!!!!! WITH A BOY!!!!!) could cause a fit of hysterics.

Our knowledge about the beast with two backs was, understandably, quite freshly acquired and it came from three sources: the first (and probably least reputable) source was one of the girls in our year with an older brother, who presumably imparted his superior thirteen-year-old’s knowledge to his little sister to give her night terrors. One time she showed us what a blow job looked like in the playground. Judging by her impression I couldn’t work out how it was any different from brushing your teeth and was intrigued but grossed-out at the same time.

Our second source was “the video”. You know the one- when your teacher popped the VHS into the creaky old machine and a man and a lady join together in a special way and have a special little baby and there’s a few full-frontal nude shots. Oh yeah, and by the way girls you’re gonna start bleeding every month for the next forty years or so. Soz. And boys, you’re gonna wake up sticky sometimes. Nothing to be ashamed about, your mum will be so proud. (There was also a bit where they told us to look at our bits in the mirror. No one admitted to trying that at home, although it was probably good advice as the news that we in fact had three different holes “down there” was a surprise to many of us girls). The teacher then swiftly brought the lesson to a close with: “any questions..? No..? Now errr, let’s do some painting…”

The third source was the copy of Malorie Blackman’s “Noughts and Crosses” which gradually made its way around the class. If you put it spine-down and let the pages fall open, it automatically went to the bit where they “…have SEX (mouthed silently) in a PRISON CELL!” There’s no denying it’s a brilliant book, but that scene was the main selling point for us dirty-minded scamps.

Along with the rumour that “tampons can get lost inside you and then you die”, there were also a vast array of sexual myths that were passed around the girl’s toilets, which had to be un-learned during, or after, our adolescence.  We confirmed amongst ourselves that the only way to do it without being really slutty and gross was to turn out the lights, tell your husband (obviously) to get under the duvet and not to look. One of my friends read way too much Philippa Gregory at a tender age and thought, until the age of sixteen, that the woman being on top was officially called “the whore pose”.

Aside from all the weird shit that eleven-year-olds make up on their own, a lot of it almost certainly stems from the representation of women in the media. It’s naïve to think that we can somehow preserve the “innocence”, or sexual obliviousness, of eleven-year-olds when they are surrounded by sexually objectifying images of women all the time. Even if they aren’t as sex-obsessed as my peers were (maybe we were an anomalous group?) they are still going to have an inkling that something is awry. A lot of what they are going to have to un-learn, from the media’s influence, is what I am still un-learning now: that women have to be an impossible version of perfection to be pleasing to a man, that to be fat is to be asexual and un-lovable and that you must pay an inordinate amount of money on hair-removal-products-and-God-knows-what- else so that a man will want to have sex with you in the first place.

So if eleven-year-olds are inevitably going to be made aware of sex, or at least sense it in their surroundings, surely there is one, vital element that they can learn properly, that they won’t have to un-learn over the course of their lives: that sex can only be consensual if both parties really want it, that the lack of a verbalized “no” does not automatically mean “yes” and that it should be pleasurable and fulfilling for both parties involved (maybe later the astonishing revelation could even come out that sex does not only take place between a man and a woman- but my school was a Catholic one, so one step at a time and all that). Surely teaching kids about consent when their brains and minds are so sponge-like would be the best possible counter-attack to the barrage of objectifying media that frame children’s perception of themselves?

Eleven-year-olds will still probably find the idea of sex terrifying and hilarious in equal measure- we should not deny the kids the inalienable right to laugh at the word penis (tee hee), but empowering them with some serious understanding and knowledge about consent and how it relates to their own experiences can only be a good thing.

So grown-ups, don’t be scared, your less-than-angelic kids probably know more about the birds and the bees than you think they do.