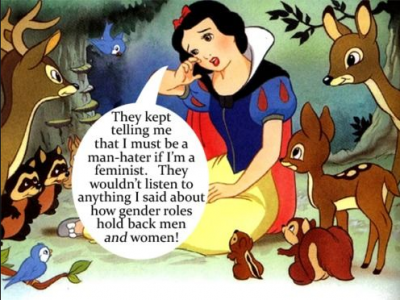 So recently, for the first time, I experienced something remotely akin to Twitter “notoriety”.  Not really a great deal, mind, and not amongst the kind of people I might have liked – if I had wanted any in the first place.  It all started when I was innocently putting together a presentation for work which talked about career progression in our department. I google image searched the word “assistant” and was  eye-rollingly unsurprised to see that 9 out of the top 10 stock images were of women.  I took a screen shot of the picture and tweeted it to @EverydaySexism and The Vagenda, because…feminism. Out of curiosity, I then google image searched “manager” and was vindicated when I saw the opposite search results, one woman amongst ten men.

I was pleasantly surprised to see that The Vagenda had retweeted me and was thinking some powerful happy sisterhood thoughts at the responses garnered, when I went to join a couple of friends for a drink at the pub below my flat.  Within about five minutes of my first glass of wine, my phone went bat shit crazy with notifications.  Naturally, with nothing better to do, the Twitter account @FeministFailures had found my tweet and retweeted it to their six thousand and something delightfully humorous followers.  I was inundated with such insightful and intelligent comments as: 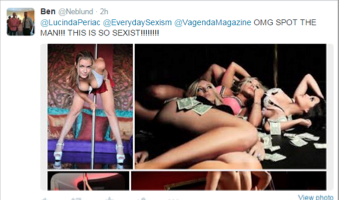 Here’s just a small selection for you.  I did, maybe foolishly, engage with one of these delightful characters who felt that I “opened myself up to being challenged”.  My only issue with that retort was that not one of the people laughing, retweeting, favouriting and ridiculing me were actually challenging my views in a meaningful way. None of them sought intelligent debate, nobody put forward an alternative view, all they did was seek to humiliate and mock. Certainly if anybody did challenge me intelligently I missed it through the storm of bullshit I was fielding.

I, as a socialist, feminist, northern working class girl living in a south-eastern small market town, will happily engage in political debate with anybody who fancies a good old chin wag thrashing it out, whether we have similar perspectives or not.  In fact I quite enjoy it and respect the ability to engage in debate with those of opposing opinions without resorting to name calling and ridicule. But when a group of people do nothing but seek to humiliate a person for their views, I get the red mist.

My first observation of the retweet from @FeministFailures was that they just didn’t appear to understand what I was outlining when I pointed out the #everydaysexism from this image search result.  They retweeted with their own image, which did nothing but reiterate my point since it showed that googling “garbage collector” and “sewer worker” brought up only men in an image search, so you know, reinforcing gender roles. Naturally their ability to misinterpret and misunderstand anything that doesn’t actually spell out the problem is actually absolute proof of how silly we feminists are, taking offence at the patriarchy.

The second thing I observed about this account, after being told by a hundred or so of their wittiest and most intellectually sharp followers was that if I was in my right to complain about such humdrudgery, then I should allow others to challenge my view.  This is fine, and as reiterated above, I have no objection to being challenged and offered an alternative perspective. Except barely one of the @FeministFailure followers did that. They lolled, they RT’d with an #SMH, they overused the emoji, and they heckled. Nobody offered me a reasonable discourse as to why I was wrong. In which case that Twitter account is there to do nothing but bully, humiliate and ridicule a group of people (feminists) found to be threatening in their eyes.

This leads me to my third and final point, and that is that after several days of wincing at my Twitter notifications, and now that the RT’s have quietened down and laughter has moved on to another feminist who is “failing”, that I pity these people.  How insecure, ineffectual and small must they feel to be threatened by a group of people who seek to redress an inequality, which whether or not they care to admit it, affects them too? Whether that is done through pointing to seemingly insignificant signs of a society obsessed with the idea of conforming to gender expectations, or through louder protest in blogs, newspaper articles, politics and Twitter, or through art, music and film, surely clamouring for men and women to be treated as equals shouldn’t be viewed as a threat but as a liberating cacophony of united voices?

I recently finished reading the great socialist tome The Ragged Trousered Philanthropists, written in 1911 by Robert Tressell and focusing on a group of labourers in a small Kentish town who refuse to accept the logic of their erstwhile socialist colleagues when they point to the injustices that the capitalist system has piled upon them.  They verbally and physically attack the very people who seek to redress the inequality of a society run by the wealthy and for the wealthy. The very same system which causes the poverty-stricken, hungry, cold and miserable existence of the working classes in the early 20th Century who deride and mock socialist principles.  The labourers wait for opportunities to call their more liberated colleagues out on what they see as the absurd notion of socialism, only to find that the socialists can respond and when they do, those who have challenged the view are left wanting for a retort.

This reminds me of the very nature of being a feminist on Twitter today.  There are groups of people out there just waiting for the opportunity to shout you down, humiliate and ridicule, and tear apart your argument by laughing and ridiculing at best, by abusing and threatening at worst. Like Frank Owen in The Philanthropists, don’t let them kill your spirit. What they don’t yet realise is that one day, they will benefit from the actions of the very movement that they dismiss.

Maybe one day, my quiet campaign and seemingly insignificant Tweets will change somebody’s mind, on the other hand, maybe not. But I am willing to give it a go and feel absolutely no regret at sending out the Tweets that caused my mini-Twitter storm in a teacup.