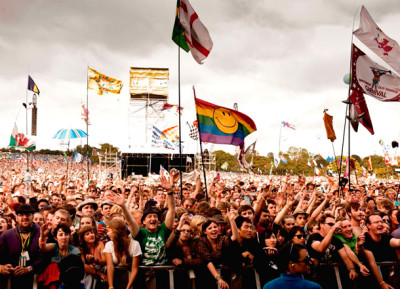 During what was an absolutely stonking weekend at Glastonbury, I was unlucky enough to witness the ‘Kim Kardashian sex tape flag’ a few times around the festival. It was sad to see such an actively negative message in that field of irrepressible glee, glorious hangovers and mind-moulding music that is Glastonbury. Naively, I was under the opinion that it would be detested within the festival, and unheard-of outside it.

Naivety is not something I wish to fall victim to… but I did. The famed Kardashian-Ray J Flag Flyer ended up shocking me – but not because of the explicit imagery it was touting. Much to Flag-Flyer’s surprise, I was far more shocked by the reaction than the original intent.

Firstly, it is vital to say that ideas on how the Kardashian franchise helps or discredits our movements and trials for total gender equality is, in this instance, irrelevant to the argument against the heinous flag. On top of that, personal opinions on Kim Kardashian or Kanye West are again null and void in discussing this serious issue – why? Because equality is not about personality or names or faces, or jobs or performances; equality is not justice. It is a movement where acts like these should be ridiculed not celebrated, detested not praised, and fought against not accepted.

If we, for a second, look past the completely backwards and disturbing message itself and look instead at the response, we should be disturbed. Men and women with self-proclaimed liberated minds were not only condoning this act, but celebrating it. Men and women were arguing that Kim Kardashian is ‘fair game’ for publicising her body previously; men and women were even calling ‘respect’ and ‘kudos’ to said Flag-Flyer. In all likelihood this was a malicious, attention-seeking wind-up to get a rise out of Yeezy, but this has gone beyond the infamous flag creator’s five minutes of fame. It has gone beyond the literary genius of: ‘Get down, girl, get head, get down’ (for those unaware of Kanye’s lyrics, they have cleverly swapped ‘go head’ to ‘get head’ to link to the image). Now it is about the reaction to it. The viral shame-sensation, now rife with laddish bantz online and an onslaught of anti-feminist, woman-shaming madness, is what we need to address. Apparently, the biggest way to insult Kanye is to visually call out ‘his woman’ as a slut.

Lily Allen, quite rightly, argued against ‘haters’ that watch someone perform purely to ‘let them have it’ through the timeless institution of Instagram. She wrote, ‘Don’t go to someone’s house and complain about their food’ with a complementary video of her burning a ‘F*CK KANYE’ flag so it just says ‘KANYE’. The video is at worst a pyromaniac’s dream and at best a creative and valid point. The Flag Flyer however, takes it one step further: going to someone’s house and complaining about their wife’s shoes. It seems that men, in character, are safe from ridicule but their wives/girlfriends/partners are not. Here I was thinking gone were the days when the way to disrespect a man was to ‘make a cuckold’ out of him. Chaucer would be thrilled that he remains so contemporary.

I’m not sure we will see a day, nor do I want to, when Beyoncé is performing and an anti-fan (for want of better word for someone who dislikes an artist but still makes the effort to go and watch them) waves a blown up picture of Jay Z sexing it up with some girl from a decade ago as an act of discrediting her. Her. But of course we wouldn’t – Jay Z’s past sex life is not the property of Beyonce, nor is his current one. The media, however, donates Beyonce’s past, present and future sex life to Jay Z. Want to shame a woman? Find a naked/sexual picture of her. Want to shame a man? Find a naked/sexual picture of his girlfriend or wife. We are still in a situation where Ray J will get respect for his part to play but not Kim. This is not a new issue but it is one that we think we are winning – we are clearly not. Christina Aguilera’s song said 13 years ago, ‘The guy can get away with it and the girl gets named’, and here we are again. So apparently you can ‘hold us down’… You just need a flag. And no, it doesn’t matter that the subject in this case is a Kardashian. We cannot pick and choose who to defend – that is not equality, and the thought of compromising it is far scarier than some explicit image of a sexual act carried out 45 times a day* (*this is not an accurate or researched statistic).

Why, indeed, is the act itself even seen as degrading? Headlines read ‘Kim Kardashian shamed by sex tape flag’ – but why is she shamed? Because they have shamed her; no other reason. She behaved like a whore, and he is damaged by association. That’s what we’re buying into.

We will continue to live in an age of indecency and amorality to women unless we change not only our actions but our responses. This malicious, spiteful flag dimmed my Glastonbury sparkle for a moment, but I refuse to stagnate in depression. So if you are in search of a credible laugh, then maybe check out the Lionel Richie Where’s Wally flag: much more genuinely entertaining, far less guaranteed to make your blood boil. Doesn’t tickle you? Find something else! Let’s give something interesting and humorous the attention it deserves instead of allowing others to fill our virtual and social lives with hate, shame and misogyny. And let’s remember that the infamous Flag Flyer at Glastonbury only gains power when our voices back him up.

2 thoughts on “Why The Kim Kardashian Sex Tape Flag Matters”