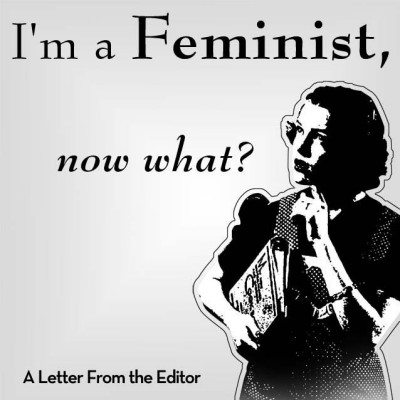 A letter from the editor, dated 19th January 2012
The idea for the Vagenda first came about in a tiny attic flat above a pub in North London, as two impoverished students sat on a carpet decorated with flora in various shades of brown, mustard and orange, and one read aloud to the other in increasingly sardonic tones from a well known weekly women’s magazine. The details of the carpet are not especially important, but it is my feeling that it adds a sense of whimsy to the scene.
The content of the magazine in question had the pair of us in fits of giggles. Why? Because it was, as the women’s press so frequently is, completely divorced from what (we thought) would make an interesting magazine. Do we care about how to match your knickers with your nail varnish? No. Do we care about how to give the perfect blowjob? No (because we already do) And do we have any idea what a ‘shoeniverse’ is? (Does Professor Brian Cox? And is it expanding?) The answer is no. We basically decided then and there that the women’s press is a large hadron collider of bullshit and that something needed to be done.
Hence the Vagenda. It is not, as the tagline says, like King Lear for girls (that is just a quote we nicked from Grazia that was so CRINGE-as they’d put it- that we totes had to use it, tbh) What the Vagenda is is a big “we call bullshit” on the mainstream women’s press. As they say on Women’s Hour, and as my boss (an ‘assertive woman’) hammered home to me last week as I stood quivering in her office, women have a problem with saying no. This magazine is essentially a gigantic NO. It is a categorical “no”, with no apologies. It is a no means no.
While this “no” still may not stand up in a courtroom during a rape trial, it is adequate for the purposes of this magazine, which are to rip the piss out of the mainstream female press. Because as Caitlin Moran has so wisely pointed out, humour, not anger, is the most powerful weapon (and we all think that we are pretty funny. For girls.) So while you may come across as a smidge of vitriol every now again, we’ll be keeping it light, ladies.
I first realised that something was up when Vogue ran an article called “Poo: the last taboo” (which, as my mother so wisely pointed out, is inherently oxy-MORONIC- why not call a turd a turd?) It is high time that we subject the media and the way it ‘speaks’ to women to all the ridicule it deserves. That is our only editorial policy (which is why you’ll find an article about how David Lynch has a metaphorical boner for dead women next to funny things our mums have said.) Think of us as a hormonal Private Eye, without the Oxbridge education, the inside knowledge or (hopefully) the legal bills. We’re like Grazia on coke! (oh, wait…) We’re like Tatler on Jobseekers! You say ‘Hello!’, we say ‘Goodbye.’
Yes, we are feminists. No, we don’t care what you do with your pubic hair (and we really wish the Guardian would stop telling us to). Some of us, having either worked or undergone modern-day slave labour at some of the publications we’ll be ridiculing, would like to avoid biting the hand that feeds us and remain anonymous. Others won’t. But all of us (and we are many) passionately believe that we have created something that is very much needed. As well as providing us with something to do other than continually clicking ‘refresh’ on ineedanotherwordforvagina.com, it is something which we all believe in, and we hope you find it worthwhile.
You can contact us at: thevagenda@gmail.com.
-Ed.