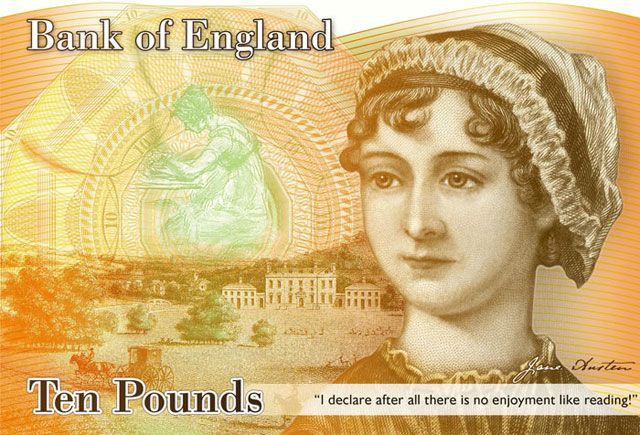 We all need to talk about Jane.
She’s going to be appearing on the ten-pound note, replacing Darwin, from 2017. Sweet, inoffensive Jane Austen, provider of solace for women everywhere, producer of Mr Darcy and by proxy that wet shirt, and steady source of income for the BBC in the form of about a million period dramas.
And yet, my Twitter feed has been filled with people, feminists and otherwise, moaning about this inoffensive, bland, mother of chick-lit, not-really-revolutionary author. ‘Of course they chose her,’ they say, ‘There’s nothing controversial about her.’ I moved on to the comment boards on news sites, which are, incidentally, all saying the same things. Some newspapers repeated this idea, giving examples of women who were more ‘revolutionary,’ and therefore appropriate, like Mary Wollstonecraft, Boudicca and Rosalind Franklin.
Well, all of those women should have a shot at being on our money, and it’s unfair that the Bank of England maintains their tokenism in having one woman on its notes and three men, when over half of the population of England, and the world, is female. (And to all of those people who think they’re exceptionally clever in pointing out the Queen is a woman, and is on all of our money, they really should learn about how all the money now shows the monarch, regardless of gender, and ….. oh my GOD, please just leave the room. Seriously. There’s a playroom over that way.)
There was quite rightly a furore about Winston Churchill replacing Elizabeth Fry on the five-pound note, which would mean that female representation on the currency shot down to zilch. Until this recent announcement about Austen, we were facing a paper Old Boys Club of England – possibly less likely to chuck your antiques out the window while screaming ‘Bully! Bully! Bully!’ than members of the Bullingdon (here’s looking at you, Boris), but still inarguably destructive.
Why, then, are we belittling an author who has contributed to British society, simply because she does not encompass everything that we feel a woman should be? It feels like a tired repetition of what happens when the token woman appears on Have I Got News For You and ends up getting berated for not being the coolest, sharpest, funniest, best looking one there.
A female author’s impact on the world shouldn’t be lessened because their primary target today is women (I say ‘today’, because there’s evidence that Austen was not considered an author for women until relatively recently.) ‘Chick-lit’ as a term is just another way of deriding literature aimed at women, doing their rubbishy women things, trying to find love, eating chocolate and just sitting with their lady-friends talking about vaginas and stuff. By belittling Austen for being an easily readable author who still resonates with The Laydeez nowadays, while most of her female contemporaries are forgotten, except in academic circles, is basically insane. Ah, Austen, poor girly Austen: not a proper feminist who tried to be like men like Wollstonecraft. Not someone who fought men like Boudicca. Not someone who was swindled by men like Franklin. But a woman, in her own right, writing about women and their interactions with society. How dare she be all up in our faces, getting on our money, when she didn’t engage with more of the public sphere and male society in general?
This idea of Austen as inconsequential is reflected in the fact that historical male authors are not held up to the same stringent standards we hold their female equivalents up to.  When Charles Dickens was put on the twenty-pound note, did anyone get their knickers in a twist over what he had contributed to England? Yes, you can argue that he influenced social reform in his time; that he wrote more novels than Austen; if you were so inclined, you could even try to argue that he was more of a ‘proper’ writer. But whoever defined ‘proper’ anyway? Austen’s novels are very well-written, acutely observed, and highlighted the real plights of middle-class women in her time. But she doesn’t engage with the supposedly important issues, because they’re women’s issues.
Finally, to those moaning that this mere novelist has knocked the great and mighty Charles Darwin off the ten-pound note, I leave you with this quote on novels from Austen’s own Northanger Abbey:
“It is only a novel… or, in short, only some work in which the greatest powers of the mind are displayed, in which the most thorough knowledge of human nature, the happiest delineation of its varieties, the liveliest effusions of wit and humour, are conveyed to the world in the best-chosen language.”
Nope, it’s not evolutionary biology, but that’s the thing – being important isn’t linear. There are all kinds of important. My kind of important wears a bonnet and encouraged generations of people (including Elizabeth Fry’s replacement, Winston Churchill) to read. My kind of important’s encompassed in a the witty, brilliant and, some might say, inoffensive Jane Austen. And I, for one, am hella pleased that I can glance at her flattened paper face while I buy my fish and chips.
-SR

14 thoughts on “Jane Austen’s on the Money”